KUWAIT CITY, April 23: MP Abdulaziz Al-Saqaabi has forwarded queries to Minister of Awqaf and Islamic Affairs Essa Al-Kandari about the news published on March 25 that ‘Taraweeh’ and ‘Al-Qiyam’ prayers would not be held in the Grand Mosque during Ramadan. If this is true, the lawmaker wants to know the reason behind such a decision, the last maintenance work in the Grand Mosque and the company that carried out such work. He inquired if the minister regularly forwarded reports on the structural condition of the Grand Mosque to the concerned departments. If yes, he requested for copies of these reports.

On some senior officials who worked in private companies after retiring from the public sector, he asked Al- Kandari and Minister of Commerce and Industry Fahd Al- Shrean if the Secretariat General of Awqaf and Information Safety Department at the Ministry of Commerce and Industry have specified regulations to prevent these officials from divulging confidential information regarding the public institutions where they worked prior to being employed in the private sector. He requested for copies of these regulations and those on preventing conflict of interests, wondering if the retired employees who had access to confidential information signed a non-disclosure agreement after retiring from the public sector. He also wants to know if any public institution has filed a case against a former employee for divulging confidential information

Establishing
He asked Deputy Prime Minister, Minister of Oil and Minister of State for Cabinet Affairs Muhammad Al-Fares about the legal basis for establishing the National Knowledge Economy Center (NKEC); organizational structure of the center; basis for the issuance of the knowledge economy index for public institutions; a copy of the agreement between the government and World Bank regarding the index ; copies of studies conducted by the Word Bank on the knowledge economy index; curriculum vitae of the chairman of the center; and objectives of the center. He asked Minister of Education and Higher Education Ali Al-Mudaf about the number of new schools that will open in academic year 2022/ 2023 and their locations, in addition to the closed and dilapidated schools and if there is a plan to reopen them. He asked Minister of Information and Culture Hamad Rouhaldeen to provide him with copies of the resignation letters of the assistant undersecretaries as per the statement he issued on March 19 that some assistant undersecretaries will resign to usher in the reform era. He also demanded for copies of the letters of the Civil Services Commission (CSC) and the Council of Ministers approving the resignation of these assistant undersecretaries. He inquired if a committee was formed to investigate errors during the broadcasting of the final match of His Highness Crown Prince Football Cup and if these errors led to the resignation of the assistant undersecretaries.

He asked Minister of Social Affairs and Societal Development and State Minister of Housing and Urban Development Affairs Mubarak Al-Arow about the regulations on investments in partnership projects between the Public Authority for Housing Welfare (PAHW) and Partnership Projects Authority. He requested for copies of the construction plans for all the partnership projects of the two authorities. In addition, MP Hesham Al-Saleh forwarded queries to First Deputy Prime Minister and Minister of Interior Sheikh Ahmad Nawaf Al-Ahmad about the reasons and legal justification for the demolition of Hosainiat Khaimat Al- Anssar in Kabd desert. He asked why the executive institutions did not follow the regulations, including the grace period starting from the issuance of warning about the violations and ending with the demolition in case the violations are addressed. He inquired if the executive institutions are partners in violating the Constitution and the National Identity Law since they rushed in responding to sectarian and provocative voices. He wants to know if the ministry will conduct an investigation to punish the individuals who are responsible for the demolition of the Husainiat. By Saeed Mahmoud Saleh Arab Times Staff 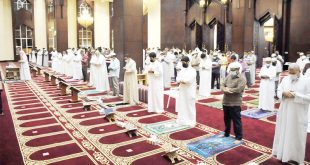 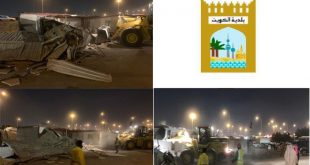 This post has been read 21012 times! KUWAIT, May 25: The government spokesperson Tariq Al-Muzram, …