KUWAIT CITY, April 15: The Ministry of Interior managed to catch a vehicle thief hours after the video went viral. The Hawally Governorate investigation department stated that after monitoring the videos which were circulated on social media a search team was formed and investigation was launched and within hours the accused was traced and after acquiring necessary legal permission for his arrest for crimes committed the accused was arrested and he confessed to thefts. 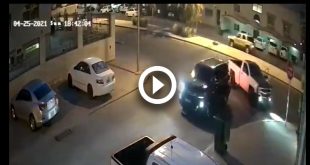