MADRID, April 5, (AP): On a day dominated by Valencia saying they felt threatened into resuming its interrupted game after an alleged racial insult, Atlético Madrid risk seeing their once-comfortable Spanish league lead cut to a point after losing to Sevilla. Valencia stopped playing at Cádiz on Sunday and walked off the field before halftime after defender Mouctar Diakhaby said he was insulted by Cádiz defender Juan Cala. Fourthplace Sevilla beat Atlético 1-0.

The loss left Diego Simeone’s team only three points ahead of secondplace Real Madrid, which on Saturday beat Eibar 2-0 to tighten the race for the title entering the final stretch. Sevilla strengthened their hold on the final qualification spot for the Champions League with the home victory against Atlético.

Marcos Acuña netted the winner with a header in the 70th minute. Lucas Ocampos missed a penalty kick for the hosts eight minutes into the match at the Ramón Sánchez-Pizjúan Stadium. “To beat the leaders you have to do a lot of things well,” Sevilla coach Julen Lopetegui said. Sevilla extended their unbeaten streak in the league to four games, while Atlético lost for the first time in five league matches. “We have to keep working hard and increase our intensity,” Simeone said. “The Spanish league is always tough until the very end.” 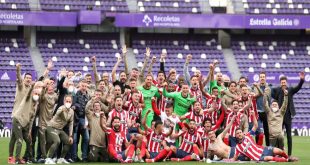