US lawmakers back equal pay for women soccer players

WASHINGTON, May 27, (AFP): US lawmakers joined calls for the United States women’s soccer team to receive equal pay on Thursday, adopting a resolution demanding an end to the gender wages gap.

“I am extremely proud that my Senate colleagues have adopted this resolution -these are great words of support for women across the country,” Murray said after the resolution’s passage.

In March, five members of the US women’s team filed a complaint against US Soccer alleging wage discrimination.

Addressing the Senate on Thursday, Murray said the resolution wasn’t “just about the money.”

“It’s also about the message it sends to women and girls across our country and the world,” Murray said.

“The pay gap between the men and women’s national soccer teams is emblematic of what is happening all across our country.

“On average, women get paid just 79 cents for every dollar a man makes … The wage gap isn’t just unfair to women. It hurts families. And it hurts our economy.”

The resolution, which has mostly symbolic value by putting public pressure on US Soccer officials, is part of a broader campaign to address the gender pay gap.

“I hope Republicans will support equal pay for equal work for all American women with more than just words and will work with us to pass Senator Mikulski’s Paycheck Fairness Act as quickly as possible,” she said. 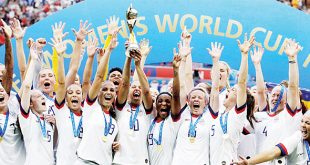