US confirms Israeli strike in Iraq

JERUSALEM, Aug 24, (AP): Israel was responsible for the bombing of an Iranian weapons depot in Iraq last month, US officials have confirmed, an attack that would mark a significant escalation in Israel’s years-long campaign against Iranian military entrenchment across the region.

The confirmation comes as Israeli Prime Minister Benjamin Netanyahu is strongly hinting that his country is behind recent airstrikes that have hit bases and munitions depot belonging to Iran-backed paramilitary forces operating in Iraq. The mystery attacks have not been claimed by any side and have left Iraqi officials scrambling for a response, amid strong speculation that Israel may have been behind them.

Earlier this week, the deputy head of the Iraqi Shiite militias, known collectively as the Popular Mobilization Forces, openly accused Israeli drones of carrying out the attacks, but ultimately blamed Washington and threatened strong retaliation for any future attack.

Such attacks are potentially destabilizing for Iraq and its fragile government, which has struggled to remain neutral amid growing tensions between the United States and Iran. Former Prime Minister Nouri al-Maliki, known for his strong allegiance to Iran, warned of a “strong response” if it is proven that Israel was behind the recent airstrikes in Iraq.

In statements issued by his office on Friday, he also said that if Israel continues to target Iraq, the country “will transform into a battle arena that drags in multiple countries, including Iran.” There have been at least three explosions at Iraqi Shiite militia bases in the past month. American officials now confirm Israel was responsible for at least one of them.

Two American officials said Israel carried out an attack on an Iranian weapons depot in July that killed two Iranian military commanders. The US officials spoke on condition of anonymity because they were not authorized to discuss the matter with the media.

The July 19 attack struck a militia base in Amirli, in Iraq’s northern Salaheddin province, causing a huge explosion and fire. A senior official with the Shiite militias at the time told The Associated Press that the base hit housed advisers from Iran and Lebanon — a reference to the Iranian-backed Lebanese Hezbollah group. He said the attack targeted the headquarters of the advisers and a weapons depot. Iranian media reported a funeral for a “shrine defender” named Abolfazl Sarabian on the next day, which typically denotes someone fighting in Iraq and Syria.

On Aug 12, a massive explosion at the al- Saqr military base near Baghdad shook the capital, killing one civilian and wounding 28 others. The base housed a weapons depot for the Iraqi federal police and the PMF. The most recent of the explosions came Tuesday night, at a munitions depot north of Baghdad.

Congratulations to Arabs over Netanyahu’s victory 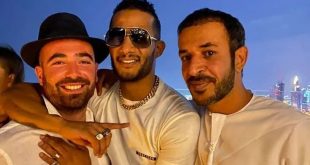