KUWAIT CITY, May 30: The United States Army Central is currently working to contain the outbreak of highly contagious norovirus at Camp Buehring and Camp Arifjan in Kuwait, according to armytimes.com. The website quoting deputy chief of public affairs and communications for US Army Central, Kavanaugh Breazeale, told Army Times 77 people have been diagnosed with symptoms of the virus, but only seven of those are confirmed cases so far.

Breazeale was quoted as saying, “We’re working diligently to identify those who are infected with the virus to ensure that it doesn’t spread more.” The norovirus causes basically very, very harsh symptoms like food poisoning.

Reports of norovirus broke out last week, with the first flight out of Kuwait having a soldier pulled from it Friday, according to the official.

The Army isn’t yet sure where the outbreak started, but it is believed the virus commonly does spread through food contamination. The US Army Central said it doesn’t expect the outbreak to impact current operations. Of the personnel with symptoms, 75 are at Camp Arifjan, and two more are at Camp Buehring, which is roughly 150 kilometers northwest of Kuwait City.

The 75th Combat Support Hospital and the 223rd Preventive Medicine Detachment are responding to the outbreak, according to Breazeale. “When war fighters are downrange, they often come into contact with diseases at ground zero of an outbreak. Although Camp Arifjan isn’t “locked down,” some of the soldiers were prevented from boarding flights to leave the base,” he said.

Moreover, the soldiers who have shown symptoms of the virus are being quarantined at the camp facilities. However, personnel attempting to fly out of Kuwait were allowed to do so after those with symptoms were separated from the rest of the unit. “We just don’t want it to spread to their families. We don’t want them to go home with it,” Breazeale said.

He added that those who were infected with the virus aren’t all from the same unit. “A person usually develops symptoms 12 to 48 hours after being exposed to norovirus and most people with norovirus illness get better within 1 to 3 days,” according to the Center for Disease Control and Prevention.

Norovirus symptoms include diarrhea, vomiting, nausea, and stomach pain. The symptoms can lead to dehydration, especially in vulnerable members of the population, such as young children and older adults. 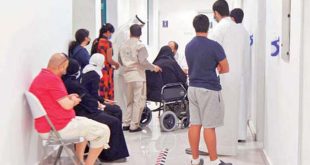 Amid COVID-19 pandemic, flu has disappeared 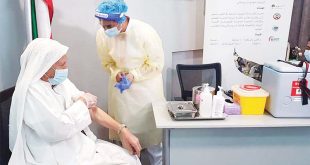 50,000 flu vaccines to be available on appointments and advance reservations

Expats to get vaccinated after Kuwaitis