KUWAIT CITY, Jul 6: Around 150-200 workers of a restaurant chain gathered in Salmiya, immediately security patrols were called and it was found that the workers had not received salaries for last 3 months as restaurants had stopped operating during lock down period where the company administration had not paid salaries.

The workers said that they had no enough money for living, the policemen of the Salmiya Police Station managed to persuade workers to stay in their homes with a promise to solve their financial problems with the company and they also informed Ministry of Social Affairs, as well as the authorities of the restaurant where the expatriates work. A case of notification was recorded.

No stranded personnel getting paid 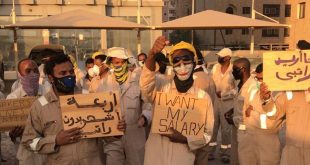 KUWAIT CITY, June 29: Although government agencies are at the core of their responsibilities in …