KUWAIT CITY, Sept 7: The head of the Distribution and Control Centers Department of the Treated Water Department at the Ministry of Public Works, Eng. Ahmed Al-Juwaid, said the ministry, after the completion of the implementation and operation of the Umm Al-Hayman treatment plant, aspires to acquire more than one million cubic meters of treated water per day, reports Al- Jarida daily. Al-Juwaid said the Treated Water Control Center, which was established in the 1980s, and is located in the Sulaibiya agricultural area on an area of 539,486 square meters, distributes water to all consumers through a huge network of pipes and advanced pumping and distribution stations of international quality that cover most of the populated places inside Kuwait, and several different parties benefit from this water, adding that the Public Works Agency spares no effort in developing and improving the facilities affiliated to the Control Center until Kuwait became a leader in the use of treated water among the countries of the region

Beneficiaries
He added the treated water is exploited in the control center, either by storing it in 4 tanks located in the center or by distributing it to the beneficiaries according to need, through the main valve rooms, pipelines, and distribution lines, indicating that the treated water level is monitored and controlled within the four tanks and the flow rate to the beneficiaries through the main control room and remote monitoring system.

He indicated that the beneficiaries of the treated water are the Abdali agricultural area, where it is fed by two pumping stations within the site of the control center with a diameter of 1200 mm; the second pumping station was inaugurated in 2010 and contains two pumps with a unit capacity of 3960 cubic meters/hour, and water is pumped through a GRP pipe with a diameter of 1200 mm, saying the water control center receives 700,000 cubic meters per day of quaternary and tertiary treated water from several sources. The Raqqa purification plant pumps 180,000 cubic meters of triple-treated water daily.

Modification
He revealed that modifications were recently made to the treated water distribution network within the Water Control Center, as it is now possible to separate the triple treated water (sourced from the Kabd and Al-Raqqa purification plants) from the quaternary treated water (sourced from the Sulaibiya purification plant), and the possibility of providing each consumer with the quality of treated water. Al-Juwaid indicated that the beneficiaries of the treated water also include the state governmental facilities, bodies and institutions, and commercial, entertainment, and real estate private sector projects, as well as the Bayan Palace and the Ministry of Works building in South Surra, the army camps in Sabhan, the Sahara Golf Resort, the Hunting and Equestrian Club, and the International Fairground in Mishref. And some horse stables in Sabhan, the Arabian Horse Club, and commercial complexes. 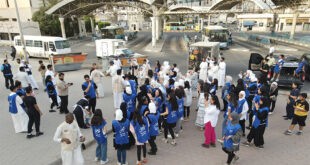 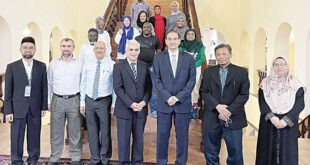 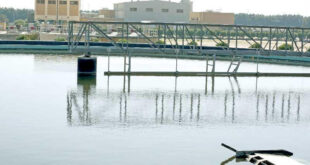 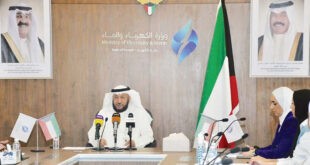 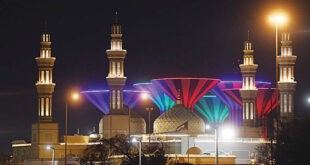 This post has been read 7816 times! Virtual confab on Wastewater Management … being held …