KUWAIT CITY, March 31: A total of 22 MPs, including Osama Al-Menawer, have so far expressed support for the no-cooperation motion against His Highness the Prime Minister Sheikh Sabah Al- Khaled. Al-Menawer, who is currently accompanying a relative undergoing treatment abroad, intends to cut short his trip in order to attend the session slated for April 6 and vote in favor of motion.

MP Abdulaziz Al-Saqaabi is in a similar situation, but he has yet to unveil his plan. MP Yousef Al-Fadala could bring about a dramatic change if he decides to attend the session and vote in favor of the motion. Al-Fadala resigned almost one year ago, but the Assembly voted against his resignation. Meanwhile, the Financial and Economic Affairs held a joint meeting with the Legislative and Legal Affairs Committee on Thursday with representatives of the government, Minister of Finance and Minister of State for Economic and Investment Affairs Abdulwahab Al-Rashid, and senior officials at the Public Institution for Social Security (PIFSS) in attendance.

Financial and Economic Affairs Committee Chairman MP Ahmed Al-Hamad confirmed an agreement has been reached with the government to approve the proposal to increase the pension of retirees by KD 20 per year, in addition to the KD 30 triennial increment scheduled for this year.

The existing law stipulates KD 30 pension increment every three years. He said the retirees have expressed concern that they might be deprived of the KD 30 increase due this year, once the proposed KD 20 annual increment is approved. He revealed that other decisions taken during the meeting include the cancellation of the stipulation on increasing the retirement age by three years in the bill submitted by the government; and approval of the proposal to distribute a portion of the profits of PIFSS to retirees in the form of a one-time incentive amounting to KD 3,000. He said the government will specify the date for the payment of this incentive to the retirees, indicating he will closely follow up the issue. He urged the government to speed up the payment of the incentive to ease the financial burdens of retirees. He added the report on this bill will be referred to the Assembly soon and it will be discussed in a special session. He denied the allegation that his committee has been delaying the completion of reports on important bills, pointing out this is the second meeting of the committee since the Assembly instructed it to study the proposed incentive for retirees. He attributed the delay to the request of the government for more time to study the bill and take into consideration the comments of MPs.

Moreover, Assembly Speaker Marzouq Al-Ghanim recently met a delegation from Nasr Sports Club headed by Chairman of the Board of Directors Khalid Al-Mutairi. The delegation consists of the football team, coach and administrative staff. Al-Ghanim honored the team for winning the Ettihad Cup — a first in 57 years. Al-Ghanim congratulated the team, while stressing the importance of sportsmanship. He believes that honoring the athletes will motivate them to do their best. He also stressed the need to fully support the athletes. On the other hand, Al-Mutairi expressed his gratitude to Al-Ghanim for honoring the team. He affirmed this is no longer surprising as the speaker is known for supporting sports. Deputy Speaker MP Ahmed Al- Shuhoumi, Assembly Secretary MP Farz Al-Daihani, and MPs Obaid Al-Wasmi, Mubarak Al-Ajmi and Abdullah Al-Turaiji attended the meeting. By Saeed Mahmoud Saleh Arab Times Staff 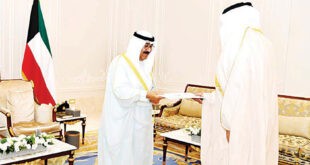 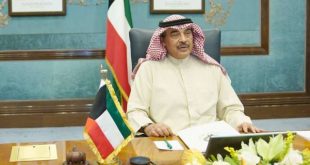