TOKYO, Aug 8, (AP): It began with a virus and a yearlong pause. It ended with a typhoon blowing through and, still, a virus. In between: just about everything. The Tokyo Olympics, christened with “2020” but held in mid-2021 after being interrupted for a year by the coronavirus, glided to their conclusion in a COVID-emptied stadium Sunday night as an often surreal mixed bag for Japan and for the world.The Olympic flame has been extinguished, marking the end of a pandemic-delayed and heavily restricted Tokyo Games. A rollicking closing ceremony with the theme “Worlds We Share” – an optimistic but ironic notion at this human moment – featured everything from stunt bikes to intricate light shows as it tried to convey a “celebratory and liberating atmosphere” for athletes after a tense two weeks. It pivoted to a live feed from Paris, host of the 2024 Summer Games.

The Olympic flag was formally handed over to Paris Mayor Anne Hidalgo.And with that, the strangest Olympic Games on record closed their books for good. Held in the middle of a resurging pandemic, rejected by many Japanese and plagued by months of administrative problems, these Games presented logistical and medical obstacles like no other, offered up serious conversations about mental health – and, when it came to sport, delivered both triumphs and a few surprising shortfalls. From the outset, expectations were middling at best, apocalyptic at worst. Even Thomas Bach, president of the International Olympic Committee, said he’d worried that these could “become the Olympic Games without a soul.”

But, he said, “what we have seen here is totally different.” “You were faster, you went higher, you were stronger because we all stood together – in solidarity,” Bach told gathered Olympians as he closed the Games. “This was even more remarkable given the many challenges you had to face because of the pandemic. In these difficult times, you give the world the most precious of gifts: hope.” “For the first time since the pandemic began,” he said, “the entire world came together.” He overstated it a bit. At these Games, even the word “together” was fraught. Spectators were kept at bay. A patchwork of rules kept athletes masked and apart for much of medal ceremonies, yet saw them swapping bodily fluids in some venues. That was less about being remiss than about being real: Risks that could be mitigated were, but at the same time events had to go on. Paris organizers promised Sunday to “take sport out of its traditional spaces” and “connect with new audiences in new ways” in 2024 – presuming, of course, the absence of a protracted pandemic. They went live from the closing to excited groups of fans clustered near the Eiffel Tower, a crowded public scene that Tokyo didn’t allow. In recent weeks, lots of people – officials, athletes, journalists – have been chewing over how these Tokyo Games will be remembered. That’s up to history, of course, but there are hints.

French President Emmanuel Macron was filmed on the top floor of the Eiffel Tower saying the Olympic slogan “higher, faster, stronger” and adding: “Together.” Brittney Griner scored 30 points, and the United States won their seventh straight gold medal in women’s basketball, beating Japan 90-75. Sue Bird and Diana Taurasi have been part of five of those gold medals. Nobody has played more Olympic games for the US than Taurasi with 38. Bird is second with 36 in her final Olympics.

Share
Previous When a maidservant is wiser than the rulers, best nations are not ruled by ignorant people
Next Kuwait end Olympic campaign with single bronze medal 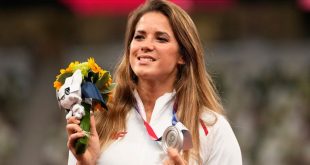 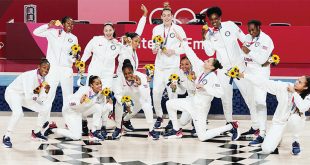 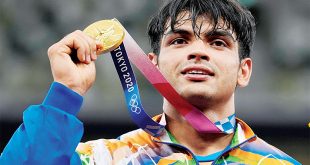 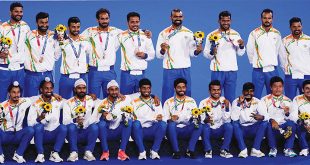