The Riyadh Declaration, adopted by the 42nd Summit of the Supreme Council of the Gulf Cooperation Council on Tuesday, stressed the GCC leaders resolve to press ahead with the march of joint action out of deep sense of responsibility towards the peoples of the GCC countries. In realization of the noble visions and aspirations for the prosperity of the GCC member countries, the GCC leaders agreed a number of principles and policies for upgrading the strategic cooperation and economic and developmental integration, according to the Declaration. The consensus among the GCC leaders, stemming from the deep-rooted brotherly relationship, the joint, shared objective and common destiny, builds on the outcomes of Al-Ula GCC Summit, held last January. Al-Ula Summit stressed commitment to collective action to promote coordination, collaboration and integration among the GCC states with a view to realizing the noble aims for which the GCC was founded in 1981 and the vision of Saudi King Salman bin Abdulaziz for implementation of the decisions made by the 36th GCC summit of December 2015.

Vision
The GCC leaders highlighted the need to implement accurately the vision of Saudi King and further strengthen the pillars of economic unity and integrate the defense and security systems in order to promote stability of the GCC states and realize the aspirations of their peoples, the Declaration reads. The second article of the joint defense treaty provides that the GCC states consider aggression on any of them is tantamount to aggression on all of them, which requires collective response, the document reminds. The GCC leaders underscored the importance of concerted efforts and integrated policies to crystalize a joint foreign policy that could serve the common aspirations and interests of the GCC peoples, and keep the GCC states away from regional or international conflicts.

They agreed to coordinate the policies of the GCC states towards sustainable development, mitigate the impacts of climate change on the GCC economies, and realize objectives of the initiative for recycling carbon dioxide unveiled by Saudi Arabia while presiding over G20 summit. The leaders agreed to instruct the competent departments to work out the necessary mechanisms for employing the best practices for environment protection and draw on the Saudi Green Initiative and the Middle East Green Initiative, announced by Saudi Crown Prince Mohammad bin Salman. They highlighted the need to follow up on the implementation of GCC strategy for diversified economy, maximize benefit from the economic potentials and double the volume of joint investments.

They stressed the need to continue the combat against the coronavirus pandemic through coordinated policies and joint action with a view to minimizing the impacts of the pandemic on the socio-economic development in the GCC countries. They also stressed the importance of promoting the role of women in economic development and putting in full play the role of youth in the business and finance sectors. They urged promoting the joint action in the areas of digitalization, modern information technology and cybersecurity and encouraging the private sector, particularly the SMEs, to play greater role in economy, the Declaration went on.

Decision
They instructed the relevant committees and departments to arrange the necessary programs to put into action the decision reached in the GCC summit, it added. The Gulf Cooperation Council on Tuesday called on Iraq to exert its utmost efforts, alongside the United Nations, in completing the demarcation of its maritime borders with Kuwait. In their final communique, Gulf Arab leaders reiterated support for Security Council Resolution number 2107, regarding the referral of the file of POWs and missing persons, Kuwait’s property and national archives to the United Nations mission. They expressed hope for Iraq to continue to cooperate in order to ensure progress is achieved on these matters.

Separately, they underlined the importance of preserving Iraq’s territorial integrity, sovereignty, Arab-Islamic identity, social fabric and national unity and supporting its efforts to confront terrorist groups and armed militias in order to consolidate state sovereignty and the rule of law. Saudi Foreign Minister Prince Faisal bin Farhan expressed Tuesday pessimism about the ongoing Vienna talks on Iran’s nuclear program. “The news coming from Vienna do not bode well due to the stringent Iranian stance,” Prince Faisal said Tuesday in a joint press conference with Secretary General of the Gulf Cooperation Council (GCC) Dr. Nayef Al- Hajraf following the conclusion of the 42nd GCC summit in Riyadh.

He explained that Iran has backpedaled on several issues that were agreed upon in previous rounds of talks, “and this is worrying”. He hoped the world major powers and Iran would reach an agreement on Tehran’s nuclear program to help defuse tension in the region and pave the way for fruitful cooperation and partnerships with Iran. The Saudi minister urged the Iranian leadership to cooperate with the region’s countries to establish relations based on cooperation, co-existence, and mutual respect. He also urged Iran to refrain from activities that negatively impact the region’s security and stability. Prince Faisal unveiled that several Gulf states are engaged in talks with Iran to explore its real intentions. The Supreme Council of the Gulf Cooperation Council reaffirmed commitment to its principled stance on Iran’s continued occupation of the three UAE islands of Greater and Lesser Tonbs and Abu Musa in the Arabian Gulf.

The final communique of the 42nd GCC Summit, released on Tuesday night, stresses that the GCC leaders maintain their principled supportive stance of the UAE right to sovereignty over the three islands. The three islands and their territorial waters, airspace, continental shelf and special economic zone are integral part of the territories of the United Arab Emirates, the communique reads. Any acts, decisions or practices by Iran to tamper with the historical or legal facts that back the UAE right to sovereignty over the three islands are deemed null and void, it points out, urging Iran to respond positively to the UAE endeavor to settle the dispute through direct negotiation or the International Court of Justice (ICJ) arbitration. On relations with the Islamic Republic of Iran, the GCC Supreme Council reaffirms commitment to the basic principles of the UN Charter and the rules of international law, including neighborliness, respect to sovereignty of states, non-interference in the domestic affairs of one another, solving differences through peaceful means, discarding sectarianism, and refraining from using or threatening to use force.

The Supreme Council is looking forwards to the Iran playing a positive role under its new administration so as to alleviate the tensions, build trust with the GCC member countries, according to the communique. The Supreme Council of the Gulf Cooperation Council emphasized its unwavering positions and resolutions supporting the legitimacy in Yemen represented in President Abdrabbu Mansur Hadi and its government to end the crisis. In its final communique, the Council called for reaching a political solution to the Yemen’s calamity, in line with the Gulf initiative and its executive mechanism, the outcomes of the national dialogue and the UN Security Council Resolution 2216. The Council called for preserving Yemen’s unity, territorial integrity, stability and sovereignty, and rejected interfering into the country’s internal affairs, said the communique.

The Council renewed support of the GCC states to the efforts of UN and US special envoys for Yemen Hans Grundberg and Tim Lenderking respectively aiming to reach a political solution, in line with the references, it said. It called on the parties to the Riyadh accord to complete the implementation of the remaining items of the deal and back the Yemeni government to achieve its missions, start development in the liberated areas to meet aspirations of Yemen’s people and restore stability in Yemen as well as recapture state’s authority and institutions across the country, it stated. The Gulf Arab states underlined the “centrality” of the Palestinian cause and support for Palestinian sovereignty over all territories occupied since June 1967 and the establishment of an independent Palestinian state with East Jerusalem as a capital. In their final communique following their 42nd summit, the six-nation Gulf Cooperation Council bloc stressed the need to guarantee the rights of refugees in accordance with the Arab Peace Initiative and international legitimacy. They underlined the need for international community to resolve the conflict in a manner that ensures the legitimate rights of the Palestinian people.

The statement called on the international community to intervene, to put a stop to Israel’s targeting of the Palestinian presence in Jerusalem and its efforts to expel Palestinians from their homes in East Jerusalem. Also, Israel’s attempts to change the legal nature and demographic structure of cities and Islamic holy places as well as to impose sovereignty over them, in clear violation of international law and United Nations resolutions. The Supreme Council affirmed its firm stances and decisions rejecting all forms of terrorism and extremism, and the motives behind them. This came in the Council’s final communique following the 42nd GCC Summit concluded earlier in the day, and affirmed also working on drying up the sources of funding terrorism.

Tolerance and coexistence amongst nations and peoples are main principles and values on which the GCC societies have been established, the communique said. Houthi militia’s continued hostile acts and terrorist operations through launching ballistic missiles and boobytrapped drones aimed at targeting civilians and the residential areas in Saudi Arabia are a grave threat to the regional and international security, it added. Houthi acts and attacks, supported by Iran, also violate international law and international humanitarian law as they use civilians in the civil areas as human shields, it noted. The Council affirmed the legitimate right of the coalition supporting legitimacy in Yemen to take required measures and steps to deal with these hostile and terrorist acts, it said. , (KUNA) 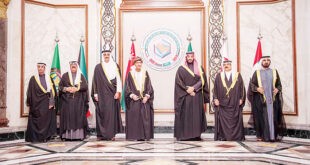 This post has been read 12704 times! Oman commends Amir’s speech In this photo released …