Teachers, academicians confirm the spread of violence in schools

‘Teacher-student relationship is at its worst’

KUWAIT CITY, Nov 5: A number of teachers and academicians have confirmed the spread of violence in schools, particularly in the secondary stage. They said violence, especially against teachers, is spreading; pointing out some political statements which belittle teachers weaken the latter and minimize their role.

A former school manager disclosed that sudden inspections are done regularly; during which sharp objects like daggers, swords and cutters are found in the possession of students who hide them in their sacks, clothes and bags. He added that in case banned items are found in the possession of a student, his guardian or parent is summoned and the student is suspended for three days.

An assistant school manager observed that the teacher-student relationship is at its worst, indicating some students bring their mobile phones to the classroom where they take videos of teachers and upload them on social media where such videos are flooded with sarcastic comments. He added that in most cases, when there is violence between a teacher and a student inside the classroom, the parents usually stand on the side of their children. He suggested organizing more awareness symposiums in schools where the experts and officials should give lectures on the role of teachers and dangerous consequences of spreading violence.

A teacher revealed that in most cases, students’ fights are planned with relatives and friends are invited to join and each one carries a tool which he thinks is more effective and more suitable. He said the inspection is usually aimed at finding mobile phones hidden by some students, but in many instances, sharp tools were found accidentally. He added the uncovered tools are handed over to the students’ guardians or parents and then the students are punished by suspending them for three days.

By Abubakar A. Ibrahim
Arab Times Staff and Agencies 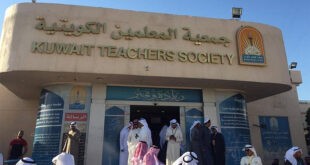 This post has been read 4739 times! KUWAIT CITY, March 20: The Minister of Education, …