GENEVA, April 24, (AP): Purged of most of its leaders in the Super League fiasco this week, the group representing European soccer clubs was given a chance to reinvent itself. Now the European Club Association is free to push for reversing Champions League changes that favor the wealthiest and more powerful who threatened to tear apart soccer’s traditional fabric. The decisions UEFA made on Monday for a Champions League revamp in 2024 – of 36 teams each playing 10 games in a single standings – clearly favor the rebels. Two wild cards for storied clubs is one gift that can be taken back now they no longer dominate a key UEFA committee.

Hours earlier around midnight on Sunday, the 246-member ECA lost 12 of the most infl uential – and most demanding – when they left to announce their own Super League. The project quickly collapsed amid a ferocious backlash from fans and domestic leagues, governments and Champions League organizer UEFA, handing the ECA a chance to restore trust. “Over the past week, we have seen the worst but also the best of football,” ECA chief executive Charlie Marshall said in a statement Friday.

“Ultimately, the best has triumphed.” The “worst” was done by clubs and people that were Marshall’s bosses until the early hours of Monday. They led ECA through talks with UEFA to shape the Champions League’s future while plotting a rival to usurp it. Juventus president Andrea Agnelli resigned as ECA chairman and Real Madrid’s Pedro López as his 1st vice chairman. Board member Ed Woodward of Manchester United also walked out. They and the nine other Super League founders terminated their memberships, freeing them of the ECA’s pledge to UEFA – signed by Agnelli in 2019 – not to play in a breakaway competition. ECA observers, and even members, had suspected the oft-claimed unity and democracy in a 55-nation group was a façade to help a storied few clubs get what they wanted. The sense of betrayal was clear this week among members who recalled Agnelli telling them ECA was more important to him than Juventus. Agnelli’s family has owned Juventus for almost 100 years. By Wednesday, the Super League was in ruins, the reputations of lead conspirators shredded and the ECA moved fast to renew itself. Super League refuseniks Paris Saint-Germain and Bayern Munich now lead a six-member emergency management team. It includes Ajax chief executive Edwin van der Sar, the widely liked former Man United and Juventus goalkeeper. “This could be the best that has happened to football,” said Olivier Jarosz, a former ECA staffer whose consultancy firm Club Affairs advises officials across Europe. “What is needed now is to restore trust and credibility.” Jarosz is a specialist in Eastern Europe soccer, which was all-but ignored in the Super League debate, and marginalized in UEFA’s slate of Champions League changes from 2024 shaped under pressure by the rebel clubs. “What I hear from clubs around Europe now is the need for reform and to create an organisation that fully represents them, so ECA could be the winner,” Jarosz told The AP.

Going further, sports law academic Antoine Duval this week urged smaller clubs to “occupy ECA and fight for your damn interest!” After the storm, the ECA and UEFA aimed for calm and stability before punishing the rebels. UEFA president Aleksander Ceferin warned there must be consequences. The clubs he called a “Dirty Dozen” face extended exile from decisionmaking and expulsion from the next Champions League until they renounce the Super League. UEFA gave itself the rest of 2021 to finalize the Champions League format. Key financial decisions already stalled last month as a rift opened between Ceferin and Agnelli. An offer could be withdrawn to share ownership with ECA of a Champions League commercial venture. A past concession was a joint UEFA- ECA panel overseeing Champions League commercial strategy in which an Agnelli aide, Stefano Bertola, took a key role. Even back in 2016, domestic league officials warned against opening UEFA’s books to give clubs such sensitive data, amid regular rumors of breakaway plans. The 30-nation European Leagues group believes a separate UEFA path to driving Champions League changes, the Club Competitions’ Committee, cannot continue with ECA having 80% of the seats.

Share
Previous In possible Oscar preview, ‘Nomadland’ wins at Spirit Awards
Next EU agency says people should get ‘second dose’ of AstraZeneca too 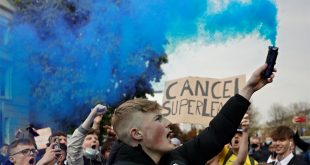 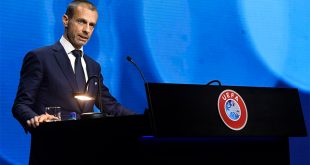