KUWAIT CITY, March 15: The number of expatriates in the country has decreased to 2,520,301 in 2021 from around 2,891,255 in 2018, reports Al-Qabas daily. According to an official statistics issued by the Central Statistical Bureau recently, the number of expatriates who obtained work permits in the government decreased during the aforementioned period by about 11,000. It was 107,657 in 2018, and decreased to 96,800 in 2021. This decrease can be attributed to the implementation of the Kuwaitization policy, which was initiated by the Civil Service Commission (CSC) in 2017, amid expectations that the number will decrease to less than that as the policy continues.

The number of domestic workers decreased by about 115,700 workers to reach about 591,368 in 2021 from more than 707,000 in 2018. The decline in the numbers is due to the crisis related to shortage of domestic workers that the country witnessed during the COVID-19 pandemic and the obstacles in the policy of recruitment.

Also, the number of residence permits under article No 23 (residency for study) reached 508 in 2021, compared to about 870 in 2018. Following the implementation of the decision not to renew work permits for expatriate holders of secondary school certificates or less who have reached the age of 60 years, the number of “free activity” residencies to 601 in 2021 from 360 in 2018. 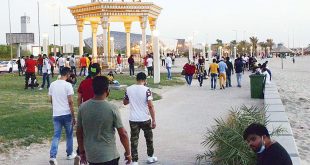