REWA: While India was celebrating 150th birth anniversary on the Father of the Nation a potrait of Mahatma Gandhi was defaced and urn contained his ashes were stolen.

The remains were stolen on Wednesday from the Bapu Bahwan memorial in Madhya Pradesh, central India where they had been since 1948. 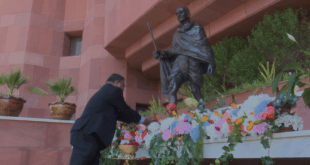