KUWAIT CITY, May 14: In a humanitarian gesture that is not alien to security officials, the Undersecretary of the Ministry of Interior, Lieutenant General Issam Al-Naham gave instructions to the Assistant Undersecretary for Ports Affairs at the Interior Ministry, Major-General Mansour Al-Awadi to provide a seat for an Egyptian woman whose husband died in a traffic accident on the Kabd Road.

The woman accompanied her husband’s remains on the plane that will carry the violators of residence law. The security source said, as soon as the Interior Ministry learned that an Egyptian man had died on the Kabd Road while delivering meals to employees of a company and that his wife arrived on visit visa on February 5, instructions were issued that a seat be allocated for her on the plane that carried the residence law violators.

She left Kuwait Wednesday, on the same plane that carried the violators. It is reported, the deceased is 39 years old and the couple was newlywed. The wife was born in 1992. The woman with her husband’s remains left on board the Jazeera Airways flight. 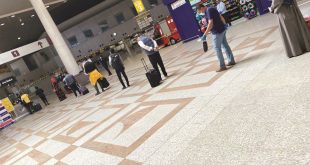