KUWAIT CITY, Feb 4: Minister of Interior, Sheikh Thamer Al-Ali has stressed on the need to upgrade the level of services provided by all service sectors of the Ministry of Interior at the best possible level, by overcoming all obstacles faced by the visitors so that their transactions can be completed what he called ‘easily and conveniently’.

The Minister was speaking while on an inspection tour of the General Traffic Department and the Residence, Nationality Affairs and Travel Documents departments to supervise the mechanism that have been issued and to ascertain their implementation and to check on the presence of assistant undersecretaries in public reception areas in the morning and to ensure they meet in the public reception area every week between 6 to 9 pm.

Problems
During the tour, said the assistant undersecretaries will deal with any problems and the solution of the problems is “part of our policy at the Ministry, and we personally help complete and facilitate the transactions of visitors,” said the minister.

He added, “When I have gained the confidence of the political leadership as a Minister of Interior, it is imperative that I go to work sites and get to know the most important dilemmas facing the administrations and give solutions that keep pace with security perceptions and facilitate the services required for citizens and residents, including working through ‘online’ and updating data to complete transactions without the need to rush to service departments.”

The minister emphasized, saying one of the goals of the ministry is to train and develop securitymen because they are the pillar directly concerned with the improvement and work performance and providing the best services, as well as applying the law without exception to everyone, and this is one of the main goals of the security system that does not accept any kind of ‘tampering’ with the law.

At the General Administration of Residence Affairs he was received by the Assistant Undersecretary for Residence Affairs, Major- General Anwar Abdullatif Al-Barjas, and listened to an explanation of the procedures followed to complete the clients’ transactions. Al-Ali also visited the General Administration of Nationality and Travel Documents department and listened to an explanation – in the presence of department directors – on the nature of transactions that are completed by the Director- General of the department, Brigadier Badr Al-Baloul.

Visit
He also made a field visit to the security directorates of the Mubarak Al-Kabeer and Ahmadi governorates and met with the emergency police officers and senior personnel and heads of department and listened to their observations about the security situation and the problems they face while performing their work. The Director of Security for the Mubarak Al- Kabeer Governorate Directorate, Brigadier Khaled Al-Kandari, and the Security Director of the Ahmadi Governorate Directorate, Major General Saleh Matar, each in their capacity in their respective sectors, listened to the minister’s instructions regarding the security situation in the two governorates. Al-Ali reviewed the readiness of security personnel, the police patrols, and recommended vigilance, attention and security deployment around the clock, and confirmed the Ministry of Interior’s keenness on the comfort and security of citizens and residents. 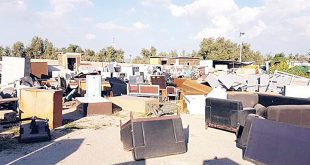