RIYADH, Dec 14: The meetings of the 42nd session of the Supreme Council of the GCC countries, chaired by Saudi Arabia, kicked off in Riyadh Tuesday, amid aspirations to strengthen the process of joint cooperation, stability, security, interdependence and integration among the Gulf states. During the session, the leaders of the GCC discussed political issues and security challenges that require intensified efforts to enhance solidarity in order to achieve the hopes and aspirations of its citizens.

This came during Crown Prince Mohammad’s speech at the GCC Summit hosted by Saudi Arabia’s Riyadh, as he presided over the gathering on behalf of King Salman bin Abdulaziz. Prince Mohammad stressed the importance of completing the remaining steps and potentials of the economic unity and the security and defense systems in a way that enhances international and regional role through unifying the political positions and developing partnerships with the international community. He extolled keenness of GCC states’ leaders, during his recent Gulf visit, on achieving the unity, abidance and solidarity that led to the success of the Al-Ula summit last January.

He said he looks forward to fulfilling this prosperous economic bloc that requires a stimulating environment based on diversifying income sources and launching promising economic potentials as well as coping with technical developments in all fields. This will lead to find a balance in achieving stability and security of the international energy market and deal with climate change through providing the world with clean energy and back innovation, he stated.

Therefore, Saudi Arabia launched “the Saudi and Middle East Green Initiatives” and announced the targeting of zero neutrality in 2030, the Saudi Crown Prince said. The Kingdom of Saudi Arabia continues making all efforts to boost the region’s stability and security, and backing political solutions and dialogue to solve the conflicts, he said. He said he is looking forward that Iraq will complete the measures of forming a government able to continue work for stability, security and development of the country. The Saudi Crown Prince affirmed continued support to the UN efforts to reach a political solution to the Yemeni crisis, in line with the three references and Saudi Arabia’s initiative, to end the Yemeni crisis. He stressed the importance of dealing seriously and effectively with Iran’s nuclear and missile program in a way that contribute to achieving international and regional security and stability. In addition, he affirmed the principles of good neighborliness, respecting the UN resolutions and making the region free from all activities that destabilize the stability. He also emphasized that the Kingdom is following the developments in Afghanistan, calling for intensifying international and regional efforts to assist Afghan people and not to make the country a heaven of terrorist organizations. Meanwhile, Bahrain’s King Hamad bin Isa lauded the outcomes of the recent visit paid by Crown Prince Mohammad bin Salman to the GCC states that paved the way for holding this Summit.

He affirmed Bahrain’s keenness, during its presidency of the 41st Summit, on following the implementation of the agenda of the joint action, achieving may key steps that are in favor of the GCC interest. The Bahraini King underlined the significance of abiding by the contents of the Al-Ula statement that calls for the full implementation of the vision of King Salman bin Abdulaziz Al Saud, in line with a certain timeframe. This also includes the accomplishment of the economic unity potentials and the joint development programs as well as the security and defense systems, in addition to coordination of stances to boost GCC solidarity and stability, the King made clear.

Oman’s Deputy Prime Minister for Cabinet Affairs Fahad bin Mahmoud Al-Saeed said on Tuesday his country’s welcomes its upcoming Gulf Cooperation Council Summit chair but seeks to maintain holding the talks’ main sessions within Saudi Arabia. The Omani official praised the huge role and efforts pursued by Saudi Arabia’s Crown Prince Mohammad bin Salman in the benefit of the six Gulf Arab states forming the bloc. Oman hopes that this “honest affinity” amongst the bloc’s nations lasts thanks to the efforts of its leaders, governments and people, he added. Secretary General of the Gulf Cooperation Council Dr. Nayef Al-Hajraf said Monday that the security of all GCC member states is inseparable, particularly amid the instability in the region and the world.

Addressing the 42nd GCC Summit hosted by Saudi Arabia on Tuesday, the GCC chief hailed the recent inauguration of the GCC unified military command, under the patronage of Saudi Crown Prince Mohammad bin Salman. It has sent a clear message of peace and resolve to defend the Gulf region security and safety of its peoples, he said. He underlined the need for bolstering joint action to retain the GCC status as a pivotal pillar for security, stability and development of GCC states. He commended the GCC role in unifying and harmonizing the member states work to overcome challenges of organized crimes, terrorism, drug trafficking, cyber and cross-border crimes. He lauded the GCC leaders instructions for all relevant bodies to embark on a comprehensive economic development drive to meet the aspiration of Gulf peoples for more welfare and prosperity, (KUNA) 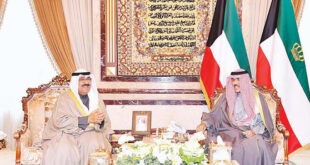 This post has been read 13323 times! Oman commends Amir’s speech In this photo released …