KUWAIT CITY, Dec 2: An unidentified Indian reportedly committed suicide yesterday evening by hanging himself with a rope inside the bathroom of a security company near the Doha Port building, reports Al-Qabas daily.

A security source said the death was discovered by a Kuwaiti director of one of the security firms. A case of suicide has been registered at the area police station.

The corpse has been referred to the Department of Forensic Medicine. Meanwhile, the security authorities have opened an extensive investigation into the death of an Asian cleaning company worker on the premises of the Public Ports Authority in Al-Nahda, reports Al-Qabas daily. It has been reported the corpse of the victim was found by an unidentified employee two days after he reportedly went missing.

The remains of the Asian have been referred to the General Department of Criminal Evidences to know the cause of death. In another development, securitymen were placed on the state of alert yesterday evening when the Operations Room of the Interior Ministry received a call about a bag left near the Jordanian Embassy in Kuwait, reports Al-Qabas daily.

The daily added, securitymen and bomb disposal experts cordoned off the area and checked the bag which turned out to be empty. A source said the Operations Room of the Interior Ministry receives similar calls almost on a daily basis, but all calls are dealt with seriously immediately after taking precautionary measures. 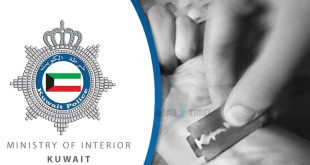 KUWAIT CITY, Nov 7: An unidentified young woman, who is believed to be in her …