KUWAIT CITY, Jan 20: Director of the Street Lighting Department in the Network Distribution Sector of the Ministry of Electricity and Water Eng. Faisal Al-Dammaj announced the department’s intention to replace the street lighting network with energy-saving and environmentally-friendly LED lights, which will save the state KD ten million annually, reports Al-Anba daily.

In an exclusive interview, Eng. Al-Dammaj said his department has listed the areas that need more street lighting especially in agricultural areas, chalet areas, some small streets, and dark complexes and mosques parking, indicating that a tender has been prepared in this regard.

He explained that a study has been conducted and plans are being prepared to install emergency poles at roundabouts and intersections, powered by solar energy in the event of any emergency and power outages, in order to ensure the continuation of lighting for preserving the safety of pedestrians.

Eng. Al-Dammaj said the total number of poles in Kuwait’s street lighting network is 25,7791, and the number of power feeding boxes is 5,870. There are also 364,910 floodlights, and the total cable lengths are 9.5 million meters.

He  talked about the department’s plan to install plastic poles in new cities and new road projects instead of the traditional poles, in order to contribute to beautifying the general view.

Share
Previous At ease Assad, all to normalize
Next Kuwaitis love truffles regardless of price 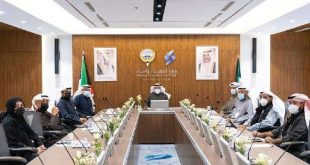