A seven-member bench of the highest court ruled that Sri Lanka’s president lacks the power to dissolve Parliament at will before 4½ years from the day of its first sitting, citing Sri Lanka’s 19th constitutional amendment that was passed in 2015, according to opposition counsel Jayampathy Wickramaratne.

Sri Lanka’s crisis began in October when Sirisena abruptly sacked then-prime minister Ranil Wickremesinghe and appointed former strongman Mahinda Rajapakse in his place, the culmination of years of infighting over Wickremesinghe’s economic reforms and his efforts to investigate alleged abuses during Sri Lanka’s long civil war, which ended in 2009.

The military under Rajapakse has been charged with carrying out some of the alleged abuses. While political norms dictate Sirisena respect the high court’s verdict, the court has little recourse to force him to, legal experts said. Soon after being appointed Prime Minister, Rajapakse sought to secure a majority in Parliament but failed. In response, Sirisena dissolved Parliament and ordered new elections, but those actions were halted by the Supreme Court. (AP) 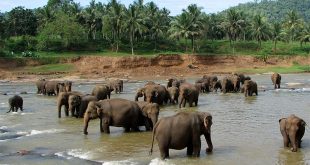