KUWAIT CITY, June 1: A long meeting is scheduled to be held before the end of this week by the First Deputy Prime Minister and Minister of Interior Sheikh Ahmed Al-Nawaf with the assistant undersecretaries and directors of the ministry to discuss the new administrative structure and mechanisms for filling the vacant leadership positions.

Meanwhile, senior security sources revealed that a specialized committee has finished preparing a report concerning “demographic imbalance and ways to fix it”.

They explained that the report – which was commissioned by the political leadership – was handled with the highest levels of confidentiality and secrecy. It made it clear that it included an integrated vision and a long-term strategy to fix the imbalances in the demographics.

It included innovative and unconventional solutions, as well as “cruel and strict” measures to curb the visa trade, and turn the page on marginal and unnecessary manpower. The sources indicated that reforming the demographic structure will be a top priority for the next government.

They stressed that the draft law on regulating the residence of foreigners, which was referred to the parliament by the government and was approved by the Interior and Defense Committee, will be an important and landmark step in reform, especially as it grants the Minister of Interior wide powers in this regard.

The sources affirmed that the expected measures would constitute a break with the state of leniency and inaction that silenced the previous governments’ handling of the most serious issue.
They explained that the new package includes the following –
■ Adopt the “ratio and proportionality” rule in distributing expatriate workers from different countries and not focus on nationalities per se.
■ Distance the Ministry of Health and Ministry of Education from providing any medical, treatment or educational services to expatriates and their children, and directing them to the private sector.
■ Grant the green light to the Ministry of Interior to use the power of administrative deportation for any violator.
■ Reduce and prohibit family visits for some nationalities.
■ Expedite the appointment of leaders in full capacity to take over the residency file. By Salem Al-Wawan Al-Seyassah Staff 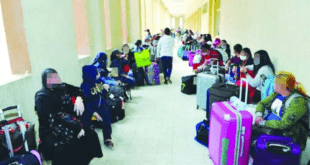 Your Highness, roll down the window … let us see

This post has been read 26005 times! KUWAIT CITY, Sept 9: The government talk about …