KUWAIT, May 31: The Public Authority for Manpower announced that it will start implementing tomorrow the administrative decision No. 535/2015 regarding the banning of employment in open areas during the noon hours from 11:00 a.m. until 4:00 p.m. daily until the end of August. .

The General Director of the authority, Ahmed Al-Mousa, said in a press statement today, Sunday, that the inspection teams in the commission will follow up the implementation of the decision over a period of 3 months, and they will launch sudden inspection campaigns on the work sites to monitor any violations, register them and take legal measures against violators.

He explained that the implementation of the decision to prohibit work at these times is aimed at organizing work and not reducing working hours, stressing care to ensure that the projects that are implemented are not subject to any damage.

He pointed out that the implementation of this decision during the past years has received the approval and acceptance of many companies in many sectors, in addition to that it took into account the public interest and is consistent with Kuwait’s obligations to implement international labor standards in the afternoon. 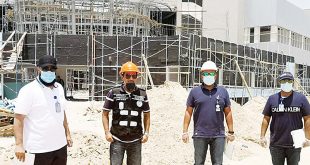 KUWAIT CITY, June 28: Statistics issued by the Public Authority for Manpower shows the 42 …