‘No asbestos in Shaab Marine area’

KUWAIT CITY, Dec 3, (KUNA): Environment Public Authority (EPA) has affirmed that there are no substances containing asbestos fibers in Shaab Marine area, denying the news that has been circulating recently on social media concerning their presence in this area.

In a press statement, it said, “This news is baseless. The concerned departments in the authority took samples of the substances. After analyzing the samples, it was discovered that they were construction materials and did not contain any asbestos substances”.

EPA stressed that it will take legal actions against anyone who spreads false or skewed information concerning the environmental condition of the country with the aim of causing panic over the environment without providing any evidences.

The authority’s move is aimed at maintaining social safety and the reverence of the country as per Article 126 of the Environment Law and Law No. 42/2014 and its amendments. 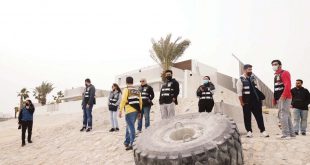