US lawmakers press for stronger action against Turkey

ISTANBUL/BEIRUT, Oct 12, (RTRS): Turkish-backed Syrian rebels seized control of the centre of the Syrian border town of Ras al Ain town on Saturday, a senior Turkish security official said, as Turkey’s offensive against a Kurdish militia in the region entered its fourth day. “The (Syrian rebel) national army took control of the town centre this morning. Inspections are being conducted in residential areas,” the official told Reuters.

Turkish forces had overnight stepped up their bombardment of Ras al Ain in their incursion, after US troops in the region came under artillery fire from Turkish positions. The United States has ramped up its efforts to persuade Ankara to halt the offensive against the US-backed Kurdish YPG forces, saying Ankara was causing “great harm” to ties and could face sanctions.

Turkey launched its incursion after US President Donald Trump spoke by phone on Sunday with Turkish President Recep Tayyip Erdogan and withdrew US troops who had been fighting alongside Kurdish forces. There has been fierce international criticism of the assault and concern about its humanitarian consequences.

The Syrian Kurdish-led administration said nearly 200,000 people have been displaced as a result of the offensive. Erdogan dismissed the mounting criticism of the operation and said on Friday evening that Turkey “will not stop it, no matter what anyone says”.

Thick plumes of smoke rose around Ras al Ain, one of two Syrian border towns targeted in the offensive, on Saturday as Turkish artillery pounded the area, said a Reuters reporter across the frontier in the Turkish town of Ceylanpinar. Intense gunfire also resounded from within Ras al Ain while warplanes could be heard flying overhead.

It was quieter at Tel Abyad, the operation’s other main target some 120 km (75 miles) to the west, with only occasional shelling heard in the area, another Reuters reporter said.

The Turkish-backed Syrian rebels said earlier they had cut the road which connects Ras al Ain and Tel Abyad and had captured 18 villages since the operation began.

Officials with the Kurdish-led Syrian Democratic Forces (SDF) could not immediately be reached for comment. On Friday, the Pentagon said US troops came under artillery fire from Turkish emplacements though none of its soldiers were wounded near the Syrian border town of Kobane, 60 km (37 miles) west of the main area of conflict. Turkey’s Defence Ministry said its forces did not open fire at the US base and took all precautions to prevent any harm to it while it was responding to fire from a nearby area by the Kurdish YPG militia, which Ankara regards as a terrorist group. US lawmakers introduced more legislation on Friday seeking to slap stiff sanctions on Turkey over its offensive against Kurdish fighters in Syria, underscoring unhappiness from both Democrats and President Donald Trump’s fellow Republicans in Congress over his Syria policy.

Representatives Eliot Engel, the Democratic chairman of the US House of Representatives Foreign Affairs Committee, and Mike McCaul, the committee’s ranking Republican, introduced a bill that would sanction Turkish officials involved in the Syria operation and banks involved with Turkey’s defense sector until Turkey ends military operations in Syria.

It also would stop arms from going to Turkish forces in Syria, and require the administration to impose existing sanctions on Turkey for its purchase of a Russian S-400 missile-defense system. On Sunday, Trump abruptly shifted policy and said he was withdrawing US forces from northeastern Syria, clearing the way for Turkey to launch an assault across the border. Turkey began the offensive quickly, pounding Kurdish militias, who had spent many months fighting alongside US forces against Islamic State militants.

Earlier, Engel and McCaul had introduced a resolution expressing strong support for Kurdish forces in Syria and recognizing their contribution to the fight against Islamic State. It also called on Turkey to immediately stop military action in northeast Syria and called on the United States to stand with Syrian Kurdish communities affected by violence.

The legislations’ practical impact was not immediately clear – to become law the sanctions bill would have to pass the House and Senate and be signed into law by Trump, or garner enough votes to override a Trump veto, and the resolution is non-binding.

But they add to a flood of condemnation on Capitol Hill of Trump’s shift in policy. Germany has banned arms exports to Turkey as a reaction to the country’s assault on the Kurdish YPG militia in northeast Syria, a foreign ministry spokeswoman said on Saturday. 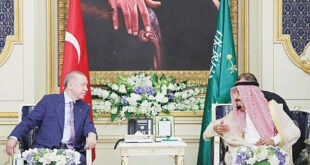 This post has been read 12237 times! Ahmed Al-Jarallah Editor-in-Chief, the Arab Times SINCE a …