The campaign aims at raising the level of awareness among the public and achieving a community partnership with all layers of society and with the governmental and private sectors, in addition to public utility establishments, and specialized bodies as well as the society. She said, “Corruption has many features or forms. Fighting it is not only in the hands of Nazaha, but we also need awareness and all efforts to help tackle it”.

Eng Al-Hammad highlighted that the role of the public – both citizens and residents – is essential. She stressed that their knowledge and awareness of everything that goes on in the Kuwaiti integrity strategy makes them active, and they have the knowledge of this strategy and its initiatives, the timeline needed for its implementation and realization, and the desired objectives of such an initiative. “Realization of the public towards the role of “Nazaha” render them to interact actively with it as informants, be committed on the implementation of the law, and avoid incurring legal penalties.

Public awareness and knowledge protect them and the country”, Eng Al-Hammad noted. She explained that the general concept is to raise awareness about the importance of the public interest over the individual interest, as well as the importance of integrity practices and manners as a preventive line of defense before corruption occurs. Kuwait Anti-Corruption Authority had recently announced the launch of its campaign “For Sake of Kuwait”, which aims to enhance integrity and combat corruption within the framework of activating its principles of reference that correspond with Kuwait’s strategy to enhance integrity and combat corruption (2019/2024), and in a bid to achieve the goals of the government’s work program in this regard. Eng Al-Hammad stressed the fact that “Nazaha” operates based on a work program by spreading preventive awareness and uniting efforts with all government institutions, the private sector, civil society organizations and members of the public as partners towards enhancing integrity and establishing transparency in economic and administrative transactions.

She said, “This manner ensures rational management of state resources and property, and the optimal use of them. This has to create more confidence in the national efforts and contribute to a better environment for doing business, attracting investments, enhancing economic competitiveness, and advancing Kuwait’s ranking on all global indicators concerned with fighting corruption until realization of the New Kuwait 2035 vision”.

Kuwait Anti-Corruption Authority called for community participation and practice of a greater role by interacting with the campaign’s goals, and ensuring permanent change, and continuing to achieve results accurately and in harmony with all concerned bodies.

Share on:
WhatsApp
Share
Previous Expats above 70 yrs old residence will not be renewed regardless of profession
Next New acting experience awaits Al-Ali 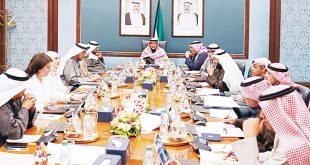