KUWAIT CITY, April 30: The Public Relations Department of Kuwait Municipality disclosed that the Capital Municipality’s Waste Removal Department carried out several inspections on shops and restaurants in Sharq and Qibla areas to verify validity of foodstuffs given to consumers. The campaigns resulted in the issuance of 30 citations as well as closure of two shops, reports Al-Seyassah daily.

The violations were related to shops and advertising licenses, display of foodstuff in front of shops, non-renewal of advertising licenses among others. In Sharq, two shops were closed for operating and managing them without getting municipal approval.

Meanwhile, in Hawally, the Safety Department launched a campaign which resulted in issuance of 19 citations over operating without safety licenses, not taking safety and preventive measures at construction sites, transgressing on state properties such as public roads and use of scaffolding without abiding by safety standards and specifications. 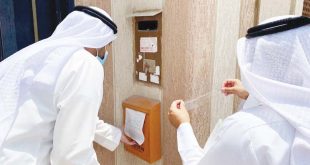 KUWAIT CITY, Nov 1: Kuwait Municipality has been considering imposing fees for the services it …