In addition, the Municipality is in dire need of technicians, assistant engineers, administrative and legal staff to cover the manpower shortage in various departments and increase the percentage of Kuwaiti employees in line with the policy on replacing expatriates with nationals.

The projected increase for the salary, wages and compensation item is about KD7 million; including end-of-service pay and health insurance. Studies on the draft budget are detailed and accurate, which will be reviewed and approved by the Municipal Council prior to its submission to the Ministry of Finance. Meanwhile, Kuwait Oil Company (KOC) signed 12 contracts with local and foreign companies worth KD45 million in September to implement various projects this year, some of which will be extended to the following years, reports Al-Anba daily based on the official data it obtained from the company. The data showed that the biggest contract – worth KD30.8 million – is for providing nursing services at the KOC Hospital in Ahmadi. KOC signed this contract with a local company, while another contract worth KD3.3 million is for electrical maintenance works at the hospital.

CSC announces end of suspension of appointment to leadership positions 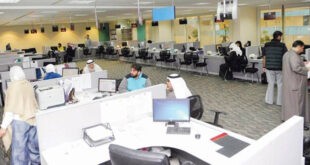