KUWAIT CITY, Oct 31: National Assembly Speaker Marzouq Ali Al- Ghanim on Tuesday adjourned the regular session until the formation of the new government. He explained the session was adjourned because there was no quorum, disclosing that the interim government has informed him they will not attend the upcoming sessions until the new government is formed.

This came after His Highness the Amir Sheikh Sabah Al-Ahmad Al-Jaber Al-Sabah issued an Amiri decree Monday, accepting the resignation of His Highness the Prime Minister Sheikh Jaber Mubarak Al-Hamad Al-Sabah and the ministers.

Meanwhile, MP Mohammad Al-Dalal praised the previous government for submitting its resignation; asserting this put them in front of a new stage that necessitates the government to learn from past experiences and mistakes. He claimed the methodology of previous governments did not yield the desired results, especially in the appointment of ministers with the ability to deal with the National Assembly and implement the development plan, stressing “the methodology in selecting ministers is incorrect.” He warned that if members of the next government are chosen in the same manner, there will be a confrontation with the National Assembly, such that the legislative and executive branches will not be able to cooperate.

He called on the next prime minister to carefully choose members of the government, asserting the next ministers must possess the necessary know-how, political experience and ability to work. He said the priority of the government in the next phase must be the security issue and readiness to face all risks as HH the Amir pointed out in his speech during the opening of the current legislative session.

MP Majed Mousaed Al-Mutairi called for the formation of a new government that takes into consideration the needs of Kuwaitis, indicating the ministers must be capable of handling local and regional issues. He also emphasized the need for the next government to take into consideration the seriousness of the current stage and to prepare for any emergency and regional changes.

He said the new government formation is expected to be a milestone in the history of the country, because it comes after the historic speech of His Highness the Amir at the opening of the current legislative session. He added the Amir highlighted in his speech the current situation, dangers surrounding the country, calls for constitutional changes, as well as vigilance on the part of the government and the people to ensure that the Kuwaiti ship is maneuvered towards safety and overcome the current political phase.

He urged the next prime minister to think about previous considerations in choosing ministers in order to avoid repeating the same mistakes, calling for removal of ministers who failed in performing their duties. He is confident that the next prime minister will not respond to those focusing on personal gains at the expense of the country and its people. He went on to say that he prefers ministers who are considered statesmen with the ability to serve the country and its people.

MP Safa’a Al-Hashem asserted the acting prime minister is aware of the current regional conditions and the economic challenges. She underscored the need to choose efficient and stronger ministers known to have clean hands and conscience. She promised to support the next prime minister and his team if they will handle national affairs properly and achieve important goals.

On another issue, the parliamentary Foreign Affairs Committee on Tuesday discussed a draft law approving the Gulf Cooperation Council agreement on combating terrorism; but decided to defer endorsement of the bill for further study.

Committee Rapporteur MP Dr Mohammed Hadi Al-Huwailah revealed that the panel also tackled a draft law approving technical cooperation between the governments of Kuwait and Brazil. He said the committee decided to hold another meeting in the presence of representatives from the Ministry of Finance to deliberate on their reservations over the agreement.

He added the committee postponed discussion of a draft law approving an agreement between the governments of Kuwait and the Syrian Arab Republic on the encouragement and mutual protection of investments until things are settled in Syria. They also talked about a draft law on Kuwait’s joining the Paris Convention on Climate Change.

Asked about the draft law on the value added tax and selective tax agreement between Gulf Cooperation Council (GCC) countries, Al-Huwailah revealed that they agreed on the need to address the National Assembly in order to refer this agreement to the parliamentary Financial and Economic Affairs Committee which will look into the technical aspects. 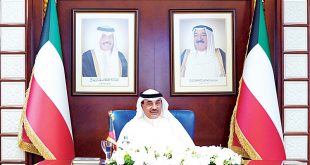 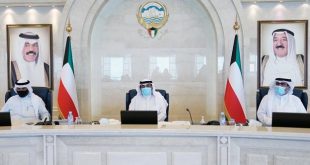 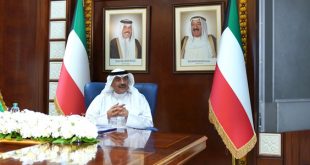 KUWAIT, Aug 10: The Cabinet held on Monday its weekly meeting virtually under the chairmanship …