The statistics, a copy of which has been obtained by the daily, show last December saw the largest movement of trucks and vehicles to and from Kuwait, and one officer put the number at more than 400,000. Nuwaiseeb Customs Inspector Bilal Al-Khamees said on Thursday all vehicles arriving or leaving Kuwait are subject to close inspection, and said the port uses the latest technologies during any unusual density in trucks and vehicles.

Al-Khamees added that inspectors thwarted many smuggle attempts and confiscated more that two millions packets of cigarettes. He stressed that the Director General of the General Administration of Customs, Counselor Jamal Al-Jalawi, is keen to provide all the needs of the Nuwaiseeb port, both in terms of machinery and equipment, as well as providing practical training to all inspectors, so that they can complete their tasks in the best way, since they are the first line of defense against smuggling all contraband. 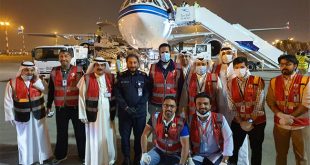 Customs receives goods from all countries

Most of the goods come via air freight’ KUWAIT CITY, March 21: Director General of …