MOI summons 9 people who gathered in one of the diwaniya

KUWAIT CITY, May 12: The General Administration of Security Relations and Media of the Ministry of Interior mentioned in a clarifying statement of the video circulating on some social media sites, and that a group of people gathered in one of the diwaniya, in violation of the decisions of the Council of Ministers and health authorities on social separation and violation of the ban.

The administration confirms that the necessary investigations were immediately conducted and the violators were monitored after the video clip was published, noting that they were called in to investigate them and take the necessary legal measures against them.

The administration calls upon all to abide by the laws in order to protect the health of citizens and residents and to preserve the public interest of the country. 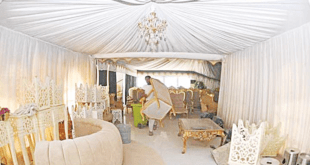 ‘I miss the ‘diwaniyas’, cannot practice hobbies in lockdown’

Going to ‘diwaniyas’ bad for health

Diwaniyas in front of Kuwaiti houses will not be removed, says Municipality