KUWAIT CITY, Oct 8, (KUNA): An attempt to smuggle some 221 pieces of cannabis hash, weighing 140 kilogram, was foiled, Ministry of Interior (MoI) announced on Saturday. The Ministry’s Public Relations pointed out that seven traffickers, two of illegal residents and five of Iranian nationalities, had attempted to smuggle narcotics at sea. After serious confrontation, the coast guard was able to apprehend the traffickers.

Gang operating fake maid offices busted: Securitymen from the General Residency Affairs Department arrested a gang of Africans and Asians for operating fake domestic labor offices and renting four apartments used as shelter for runaway domestic workers, reports Al-Shahed daily. Securitymen raided the apartments and arrested 17 domestic workers, including nine men. A security source disclosed the gang hires absconding workers and urge them to run away from the sponsors, thus, they employed them more than once so the gang receives from new sponsors many times over.

Bid to prevent Kuwaiti motorists: Customs authorities in Saudi Arabia have implemented a new system to prevent Kuwaitis from entering with their cars if they previously entered the country with cars bearing Kuwaiti plate numbers and their vehicles have been there for more than three months, reports Al-Rai daily. Customs supervisor at Salmi and Abdali border posts Farhan Al-Ajmi said the Saudi authorities took this decision because the Kingdom noticed thousands of cars with Kuwaiti plates plying through its territory. Al-Ajmai disclosed some fraudsters could have removed the Kuwaiti plate numbers and replaced them with Saudi ones to commit traffic violations so there are many cases filed against unknown people. He added the new system is applied on all countries, not just Kuwait.

Saudi, 2 Bedouns held for breaking into cars: Securitymen from the Criminal Investigations Department arrested a Saudi and two Bedouns for stealing from cars, reports Al-Qabas daily. Securitymen intensified their efforts after receiving several complaints from the owners of cars looted by the suspects who were nabbed in Sulaibiya. A security source revealed the suspects’ modus operandi saying one of them is in charge of breaking the windows of cars, another takes valuable items from the vehicles while the other serves as a lookout. 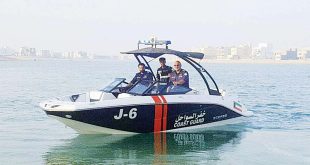