MoH plans campaign to up focus on heart failure

KUWAIT CITY, Sept 30, (KUNA): Kuwait’s Ministry of Health announced on Sunday the launch of an awareness campaign in October called “Let’s Make a Promise For All Our Hearts.” This campaign aims to spread the right definition of heart failure, the dangerous factors that lead to it, ways of recognizing its symptoms and the ways of protection.

Head of Media Department in the Ministry of Health Dr Ghalia Al-Mutairi, said in a press release that this campaign, coinciding with the occasion of World Heart Day, is part of the ministry’s efforts to fight chronic diseases. Al-Mutairi said that this campaign will continue for a month and it will be displayed through various health care centers in different areas to spread as much awareness as possible.

She noted that EPA is continuously working on reducing pollution levels and facing the effects of population growth, power plants, transportation and modern lifestyle on the environment. This event will bring awareness on the impact of plastic waste on the environment in Kuwait. The country pays a very high bill to get rid of about 44,000 tons of plastic waste each year, Al-Ibrahim added 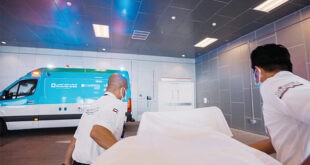 Over half of UAE residents affected by heart disease