MoCI introduces changes to fee structure for issuance of license

KUWAIT CITY, April 21: The Ministry of Commerce and Industry (MoCI) has introduced an amendment to the fee structure for license issuance and re-licensing of companies as per the Situation Adjustment Committee’s decision, reports Al-Rai daily quoting sources.

Sources disclosed the amendment stipulates that companies should pay special fees and save the record number and commercial name of the entity. Sources said the new fees will be applied by the ministry on company owners applying for re-licensing, in addition to the fees paid by the companies that renew their licenses on the specified date.

Sources pointed out that re-licensing of companies entails maintenance of old records; thereby, retaining their financial and legal positions.

According to the new structure, the extra fees will include re-licensing of individual corporations, partnerships, corporations and joint stock companies (closed and general).

Sources said the amendment is in coordination with the State Audit Bureau that stressed the need to impose fine on companies which did not renew their licenses for a year.

Meanwhile, eight local investment funds in which the Kuwait Investment Authority has shares have not distributed dividends since the beginning of its shares, reports Al-Jarida daily.

Sources familiar with the daily said the KIA tends to reduce its ownership in some of the funds, especially after exceeding the permitted shares rate, which is 75 percent, following the irregularities monitored by the Audit Bureau and called for rectification during the last period.

Sources pointed out that some funds did not match their performance with the gains made by the Kuwait Stock Exchange following the recent improvements, especially after the promotion to the Emerging Markets Club, following the promotion by FTSE Russell, and the upcoming upgrade of Morgan Stanley and Standard & Poor’s, which is the largest investor in the Kuwait Stock Exchange. 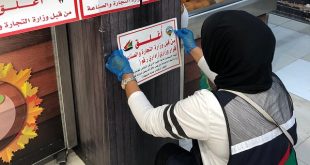 Ministry of Commerce your administration and laws are annoying

Pricing responsibility of Ministry of Commerce

‘Senior posts’ to be filled at MoCI