KUWAIT CITY, April 28: In light of the shortage in the domestic labor sector of the country, and with the spread of the phenomenon of freelance domestic workers, which is in violation of the law, as well as the increase in the number of complaints against these offices due to their exploitation of the situation, and their attempts to raise the recruitment costs, the Ministry of Commerce and Industry has begun activating its control over domestic labor recruitment offices and working on putting an end to the phenomenon of domestic workers fleeing from their sponsors, reports Al-Rai daily. Earlier this week, the Commercial Control Department of the ministry carried out an inspection campaign of the domestic labor recruitment offices in Hawally Governorate to ensure labor recruitment prices are not exaggerated, and to monitor compliance with the ministerial decision related to the recruitment prices.

The daily accompanied the inspection team, and documented its work. Warnings were issued to offices that do not implement the new rules for those seeking employment, obligating them to provide requests within a short period of time, and not obligating the consumer to pay for the worker’s ticket, and adhering to the price of only KD 890 specified by the Ministry of Commerce and Industry.

License
In this context, Head of the ministry’s emergency team Ahmed Al- Issa said, “No owner of a domestic labor recruitment office has the right to take additional fees above the stipulated KD 890. Any complaint we receive from consumers is dealt with immediately. The office is closed or the license is withdrawn for lack of commitment to the decisions of the ministry”. He said, “This is the first campaign of its kind. It will continue in all governorates to ensure the commitment of the owners of those offices, and to address any injustice or fraud to which any client is exposed to. The first of these campaigns resulted in the inspection of about 40 domestic labor recruitment offices in Hawally.

The violating offices were closed during the campaign, which will be followed by necessary legal measures. Legal measures will be taken against any holder of the license for a domestic labor recruitment office who sublet it. This is because it was noted during the campaign that there are a limited number of domestic workers due to the lack of demand. We, in turn, compel the owners of those offices to provide labor applications from the permitted countries. In the event that he does not provide employment within three days or refrains from providing them, necessary measures will be taken against him”. Al-Issa concluded by stressing that, “During the delivery of the specified amount to the owner of the office, all clients should be responsible in making sure to obtain the invoice and the contract in order to ensure his legal right in the event of any imbalance in the agreement between the two parties” 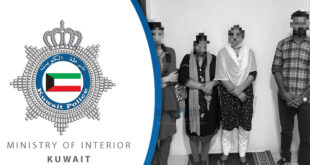 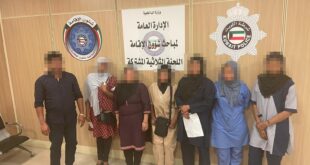