KUWAIT CITY, Jan 3: Director of the Emergency Services Department in the Electrical Distribution Networks Sector, Eng Adel Mahmoud, announced that the ministry has signed a contract to transport and operate diesel power generators with a local company. Eng Mahmoud said in a press statement the cost of the contract is 4,409,000 dinars.

The contract includes 22 ‘truck’ heads to transport power generators of various sizes from their sites to areas that are exposed to emergency outages beyond the control of the ministry, as well as 10 ‘diesel tankers’, as well as providing a supply service to diesel backup generators. He mentioned that the Distribution Networks Sector represented by the Emergency Department held the preliminary meeting for the tender for the supply of 44 generators of various sizes.

During the meeting, inquiries were answered by representatives of companies that wish to compete to win the tender. He explained the aforementioned tender includes the supply of 12 generators of 180 kV, 12 generators of 320 kV, and 12 generators of 500 kV, in addition to 8 generators of 1800 kV. He said the Emergency Services Department is the last line of defense for the Ministry of Electricity and Water, through which the power outage areas are provided with the necessary electrical energy, until the faults are repaired and power is restored through the network, describing it as the ministry’s ‘first aid’. 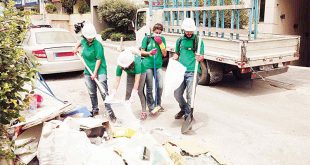