KUWAIT CITY, March 5, (Agencies): Minister of Oil, Electricity and Water Issam Al-Marzouq affirmed on Sunday that the ministry was well prepared for upcoming summer season. The ministry has prepared well for summer season with aim of limiting prospected power outages, said the minister in a statement on sidelines of opening the project for expanding Al-Sabbiyah power station (the second phase). Surplus of the prospected electric production would in the range of 2,700 megawatts, he said, also noting that station’s full capacity stands at 16,700 MW.

As to outages’ causes, he said they happen due to extreme heat which increases pressure on the cables or the relays or as a result of accidental damage in the cables. Kuwait’s electric network is one of the best in the world, according to international quality indexes, the minister said, affirming that there has been no delay in maintaining the electric installations.

On the GCC power grid, he said it saves 1,200 MW. Kuwait, he said, benefited twice from the regional joint network last year — using up 500 MW. On the project of expanding Al-Sabbiyah station, signed on May 28, 2015, he said it secures 500 MW, at a value of KD 105 million. This venture had been executed ahead of ending schedule and went into operation on Feb 23rd

Promissory notes use illegal
The Ministry of Commerce and Industry has warned car rental offices and agents concerning the use of promissory notes, reports Al-Shahed daily quoting reliable sources. They revealed that the ministry has decided to issue citations against car offices that force their clients to sign promissory notes, an act that is in violation of the relevant commerce law. The sources said this action was taken after several complaints were filed by the clients at the commerce centers, affirming that legal actions will be taken against the violators. They clarified that one of the ministry conditions stipulates that the car rental offices are not entitled to this right.

Kuwait ranks sixth in terms of risk of extreme temperatures

Temperatures to dip on Saturday 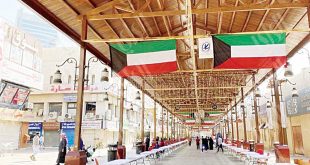 This post has been read 5852 times! KUWAIT CITY, Oct 12: Personnel from the Criminal …