KUWAIT CITY, Sept 17 : In an apparent confirmation of news published earlier about the absence of messengers in the Ministry of Social Affairs; the corridors in the Ministries Complex, which used to be crowded with messengers, are now empty.

This is due to the expiry of the contract concluded between the ministry and the company providing such workers. It has been reported that the ministry decided not to renew the contract as the company had been paying the salaries of its employees irregularly for six months, reports Al- Jarida daily. Informed sources told the daily that the ministry signed a contract with a new company to provide messengers temporarily for a period of two months or until the new tender is awarded – about 350 out of 1,600 correspondents are assigned in all sectors of the ministry.

Sources said most of the workers are assigned in the Social Care Sector to serve the administrations of the welfare complexes for the elderly and juveniles, family nursery, social development and family care units in the Development Sector. Sources added the ministry’s departments located in the Ministries Complex are not covered by this employment, indicating there is a tendency not to provide messengers within these departments even after the new tender is launched and the contract is concluded with the winning company. Sources affirmed the ministry is striving to reduce expenditures and limit unnecessary spending, especially after reducing its budget for fiscal 2020-2021 by some millions of dinars, in line with the directives of the Ministry of Finance and decisions of the Council of Ministers in this regard. 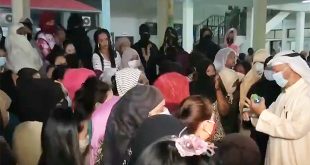