Autopsy revealed that Villavende was raped before her employers beat her to death in Kuwait.

KUWAIT CITY, Jan 15: The Philippine government has imposed a total deployment ban for Filipino workers to Kuwait after the National Bureau of Investigation (NBI) autopsy report revealed the horrible circumstances surrounding the death of Filipino household service worker Jeanelyn Villavende who was allegedly tortured to death and sexually abused by her Kuwaiti employers in December 2019.

Department of Labor and Employment (DOLE) Secretary Silvestre Bello III announced and confirmed to the press on Wednesday that the Philippine Overseas Employment Administration (POEA) Governing Board signed and approved a resolution for a total deployment ban on the deployment of all newly hired workers bound for Kuwait that include domestic or household service workers, semi-skilled workers, skilled workers and professionals. The resolution provided an exception for the skilled workers and professionals who are categorized as “Balik- Manggagawa” and those who will be exempted by the DOLE Secretary.

It can be recalled that a partial deployment ban had been in place since Jan 3, a move that covered first time house-hold service workers with overseas employment certificates issued after 5:00 pm on Jan 3, 2020.

The ban came after an NBI autopsy revealed that Villavende, 26, was raped before her employers beat her to death in Kuwait.

The autopsy also showed that she had suffered from past physical abuse before her death in December.

The earlier autopsy report of the Kuwaiti government of Kuwait did not mention rape nor indications of past abuse, but Justice Secretary Menardo Guevarra cited that both the Philippine and Kuwaiti reports pointed to the same cause of death, which was “trauma due to the infliction of injuries to the body.”

Ban
The Arab Times tried to reach Philippine Labor Attache to Kuwait Nasser Mustafa on Wednesday to further shed light on the implementing rules and guidelines on the total deployment ban.

Mustafa who is the concurrent Philippine Labour Attache to Riyadh is in Riyadh now and still has to issue an official statement on the total deployment ban. Filipino workers in Kuwait especially those working as household service workers are seeking clarification from the Philippine Overseas Labour Office in Kuwait if they are covered by the ban or exempted.

There are over 250,000 Filipino workers in Kuwait and 65 percent of which work as household service workers. With the imposition of the total deployment ban on Wednesday, a huge number of Filipino workers in Kuwait who are set to go home to the Philippines for their annual leave had to call off their travel plans pending clarification of the implementing rules and guidelines from the POEA Governing Board.

Commenting on the action taken by Manila, Kuwait’s Minister of Finance and acting Minister of State for Economic Affairs Maryam Al-Aqeel affirmed that Kuwait’s policy at this stage is about widening the scope of recruiting domestic workers from various markets such as Nepal, Ethiopia, India and Indonesia.

She emphasized recruitment activities will no longer be limited to a country or two. The minister explained that Public Authority for Manpower has been coordinating with relevant authorities to ease procedures for recruiting workers from those countries to avoid inadequacy in the required number of domestic workers in the country.

She said the number of male and female domestic workers in Kuwait reached 730,000 and the volume of complaints from them is minimal compared to their number, while most of the cases are settled amicably. She revealed that only 704 cases were referred to the judiciary out of 2,805 complaints received last year, which means that the larger percentage of cases was settled amicably. She reaffirmed that Kuwait is committed to protecting the rights of workers.

She reiterated the Public Authority for Manpower will diversify markets for recruiting domestic workers to achieve many objectives. The objectives include controlling the cost of recruitment, preventing suspension of activities in case of emergencies in a country, breaking monopoly and consolidating competition, and also prevent increasing cost.

In his comment, Deputy Director General for Manpower Protection at the Public Authority for Manpower Dr Mubarak Al-Azmi declared that the authority is yet to receive the official decision concerning ban on deployment of Filipino domestic workers to Kuwait. He affirmed that everybody is subject to the Constitution in Kuwait, whether employer or employee, so breaking the law has consequences.

He said crime does not have nationality, because it can happen in any country and the role of the department is to frown at crime and hold accountable whoever is responsible, “because our ethics despise crime under any guise even before the law.” He reaffirmed that domestic workers from any country, including Filipinos, are protected by norms and traditions – even ahead of the Constitution in Kuwait, even before the governments of their countries.

He pointed out, “We consider Filipino workers as an integral part of the Kuwaiti society, because we see them as contributors to development in private sector and part of the family in homes. It is a positive thing that workers have contracts to make them feel secure, so we hope they will continue to work in Kuwait and enjoy good treatment.” 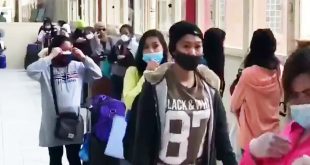 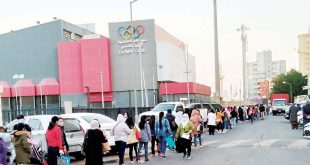 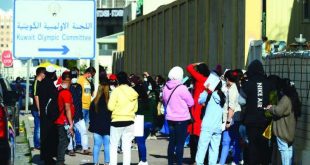