AUSTIN, Texas (AP) — Lewis Hamilton got the victory he needed to keep his Formula One championship hopes alive, winning the U.S. Grand Prix for the fourth time in five years Sunday.
Hamilton cut Mercedes teammate and championship leader Nico Rosberg’s points lead to 26 with three races to go. Rosberg finished second ahead of Red Bull’s Daniel Ricciardo to maintain a relatively comfortable cushion over Hamilton in the title chase.
Rosberg doesn’t have to win any of the final three races to get his first Formula One championship, even if Hamilton wins all of them. Two more seconds and a third place will wrap it up. But that also means Rosberg can’t afford a bad race if Hamilton is going to make a late charge.
Hamilton started from pole position and got one of his best starts of the season to hold position for his seventh victory of the season.
“Yeehaw!” Hamilton roared over his car radio as he rounded the final turn for the checkered flag and his 50th career win.
Hamilton has called the Texas race “good hunting ground” for him and the perfect place to make a run at Rosberg. Hamilton has dominated the Circuit of the Americas since the track opened in 2012 and his 2015 victory over Rosberg clinched his second consecutive season championship.
But the season marches on next week to Mexico City, where Rosberg won last year.
Rosberg has said he won’t settle for the safety of second place and will push for wins over the final stretch of the season as he chases a first career title that would match father Keke Rosberg’s 1982 championship.
But he never had a chance to make a move for victory Sunday. Rosberg He made a late charge over the final 10 laps to shave nearly five seconds off Hamilton’s lead but never threatened to overtake him for the win.
Hamilton had won only three of his previous eight starts from pole position this season, and had been plagued by poor starts all year. He finally got the jump he needed with no problems.
Hamilton got one of his best starts of the season with a burst up the 110-foot, elevated left turn that whiplashes the cars back downhill. Hamilton was first to the corner, held position and was off and running. Rosberg was pushed into third when Ricciardo edged him at the top of the turn.
All Hamilton had to do from there was hope he didn’t run into similar problems two races earlier in Malaysia, where he was cruising toward victory with less than 15 laps to go before an engine failure knocked him out of the race.
Ferrari’s Sebastian Vettel finished fourth.
The Haas F1 team finished 10th with Romain Grosjean earning the rookie American-led team a point in its debut appearance in its home race. 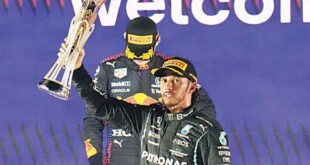