DUBAI, Dec 9, (RTRS): Dubai-based Landmark Group, one of the Middle East’s largest retail firms, said it was pulling Donald Trump products off its shelves in response to the Republican presidential frontrunner’s call for a ban on Muslims entering the United States. Landmark and DT Home Marks International LLC have an exclusive deal to sell Trump Home products – including lighting, mirrors, and jewellery boxes — in their Lifestyle department stores in Kuwait, the UAE, Saudi Arabia and Qatar. “In light of the recent statements made by the presidential candidate in the US media, we have suspended sale of all products from the Trump Home décor range,” CEO Sachin Mundhwa said in an emailed statement. The group did not give details on the value of the contract. On Monday, Trump called for a ban on Muslims entering the United States in the most dramatic response by a candidate yet to last week’s shooting spree by two Muslims in California.

Rebuke
The call drew sharp rebuke from both the White House and other Republican presidential candidates. Lifestyle has more than 190 stores across the Middle East, Pakistan, Yemen, Libya and Tanzania. The real estate mogul and reality TV star now makes most of his money from licensing his name on golf courses, luxury developments and retail goods, rather than owning buildings. Trump Home products, like a “table lamp in antique brass with crystal drops” and a decorative box with a “brilliant plume of a peacock… redecorated in gold finish for an exclusive look”, have been on sale at Lifestyle department stores in the United Arab Emirates, Kuwait, Saudi Arabia and Qatar.

One former Trump business partner in Dubai, construction billionaire Khalaf al-Habtoor, told Reuters Trump had wrecked his prospects for successful future collaborations in the region. “He is really creating war. He’s creating hatred between Muslims and Christians,” Habtoor, who at one time held the contract to build a latercancelled Trump International Hotel & Tower in Dubai, told Reuters. “Muslims have invested hundreds and hundreds of billions of dollars, creating jobs for Americans. They can go invest it somewhere else.” Although there were no other immediate announcements of business partners breaking with Trump so far, others made clear they were uneasy using his brand name in the Middle East, where he has been actively expanding his footprint in recent years, heavily concentrated in the Gulf business hub of Dubai.

Build
In its biggest regional partnership to date, his Trump Organization is working with Dubai-based real estate giant DAMAC Properties to build two golf clubs — including one with a course designed by Tiger Woods — and a gated island community outside the city. The 42 million sq ft AKOYA by DAMAC development, which will contain the Trump International Golf Club Dubai, Trump PRVT mansions and villas and a Trump Spa & Wellness Centre, is valued at some $6 billion. DAMAC drew a distinction between its partner’s business and political interests, but declined to say explicitly whether it was reconsidering the partnership. “We would like to stress that our agreement is with the Trump Organization as one of the premium golf course operators in the world,” Niall McLoughlin, DAMAC’s senior vice president for communications, said in a statement. “As such we would not comment further on Mr. Trump’s personal or political agenda, nor comment on the internal American political debate scene.” Dubai’s Al Tayer group, which bills itself as the Middle East’s biggest luxury retailer, opened two showrooms in Dubai and Abu Dhabi in June to sell “Trump Home by Dorya” furniture made by a firm that licenses Trump’s name. 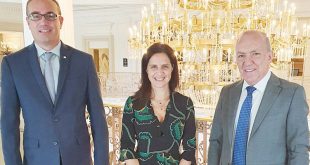 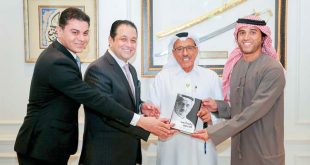