Region’s projects index down by 1.1% during Aug 5 to Sept

KUWAIT CITY, Oct 1: Kuwait ranked third in the Gulf and fifth regionally on MEED magazine’s index of Gulf projects from August 5 to September 9, with a value of $202 billion, reports Al-Qabas daily. The region’s projects index declined by 1.1% for the same period as there were $3.03 trillion of projects planned or underway while 81 percent or $2.48 trillion accounted for the GCC.

The UAE market was the best performer during this period, rising by 1.1%, which indicates that the market may be in a recovery mode. On an annual basis, the total value of projects planned or underway in the UAE decreased by 30%

Ongoing
The total of planned or ongoing projects in the UAE, worth $521 billion, was boosted by the re-launch of the Deira Islands project in Dubai, which returned to join the index after it was suspended, and the project to develop five reclaimed islands off the Deira Corniche, now known as Dubai Islands, was relaunched by local master developer Nakheel, which plans to build villas, hotels and other amenities.

Apart from real estate, budget adjustments in addition to the components of the sour gas development project in Al Hail the Abu Dhabi National Oil Company “ADNOC” also contributed to the UAE’s gains. The increase of $5.8 billion in the UAE was offset by a decrease of $20 billion in the larger Saudi market, which fell 1.5 percent to $1.32 trillion. On an annual basis, the Saudi market decreased by 1.5%.

Although the overall value of projects planned or underway has decreased, there has been an increase in construction activity in the Kingdom over the past year with an increasing number of projects moving into the implementation phase. While the drop of $20 billion in the Kingdom was the largest drop in the Gulf region, the drop of $11.7 billion in Iraq was in terms of percentage the most significant as it represented a 4% decrease during this period. The sharp decline is largely due to the status of the Basrah Gas Company’s South Gas Exploitation Project, which has been put on hold. 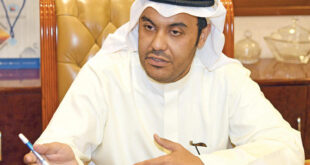 This post has been read 15213 times! KUWAIT CITY, Nov 21: The government institutions during …