Minister urged to look into the matter

KUWAIT CITY, June 20: A number of Kuwaiti imams appointed in the Ministry of Awqaf and Islamic Affairs expressed strong dissatisfaction with the various arbitrary matters they are subjected to that do not serve the mosque charter, reports Al-Seyassah daily.

In press statements to the daily, they stressed that their suffering lies in the fact that the fate of their career is in the hands of expatriate counselors in the absence of Kuwaiti officials. The imams explained that the Ministry of Awqaf and Islamic Affairs is a Kuwaiti ministry in name but is actually managed by expatriates. Some of the officials are controlled by a large number of foreign advisors such that those officials cannot do anything without consulting these advisors.

They appealed to the Minister of Awqaf and Islamic Affairs Dr Fahad Al-Afasi to look into their conditions and examine the reality of their suffering in their country, saying, “We are Kuwaitis, and we have the right for shelter, education, health and other care in our country.”

The imams indicated that they are really suffering under the current situation as imams, highlighting that the cadre of imams is now under the jurisdiction of the legislative committee but needs someone to push it. They said the privilege of being appointed as imam or muezzin is rather a fantasy in light of the presence of 39 percent of the appointed Kuwaiti imams who do not find other means of income, adding that their numbers are 114 imams and 11 muezzins.

Another challenge facing them is when they take vacation (annual leave), as they are supposed to find a substitute, even from another mosque, let alone the fact that they get reprimanded for the slightest mistake and even get dismissed.

A number of Kuwaiti imams said the “Imams and Preachers” syndicate does not represent them due to the fact that this syndicate does not carry their concerns or even fight for our demands. They added, “In the recent period, the syndicate does not communicate with its members except within very narrow limits. It was different during the era of undersecretary Dawood Al-Asousi, as he welcomed our demands and sought to achieve them, but now unfortunately our issues are rarely addressed or rather responded to.”

Share
Previous MoC ready to resume work in all sectors for citizens, expats
Next MoE to terminate services of 101 expats in administrative positions

704 apply for imam and muezzin posts 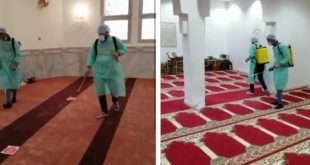