The UAE champions continued to snatch the gold medals, piling up to three in these competitions. Saffia Al-Sayegh took the gold medal Sheikh Jaber Bridge, while the Saudi cyclist won the silver medal, the first to be garnered by the Saudi team. The bike race proceeds on Sunday with a men’s ITT competition. Kuwait clinched a total 10 medals in shooting at the GCC Games as the marksmen were on target with a gold medal, two silver medals and a bronze medal on the final day of the category. Shooters from the host nation took three gold, four silver and three bronze medals in total throughout various competitions . In the men’s skeet teams event, Abdallah and Mansour Al-Rashidi alongside Abulaziz Al-Saad were crowned champions, with the Qataris and Bahrainis in second and third respectively.

Mansour Al-Rashidi and Mohammad Al-Daihani won silver and bronze for Kuwait in the men’s skeet individuals with the gold going to Saif Bin Futtais of the United Arab Emirates. Abdullah Al-Harbi and Bandar and Ali Al-Mutairi took another silver for the hosts in the men’s 10 meter air rifl e teams event, with Oman reaching the top of the podium as Bahrain trailed in third. Chairman of the Kuwait Olympic Committee Sheikh Fahad Nasser Sabah Al-Ahmad Al-Sabah congratulated the Kuwaiti shooters, who were also commended by Kuwait Shooting Federation President Duaij Al-Otaibi.

The hosts cap their impressive display across swimming events at the games with 12 gold medals, alongside another two silver and two bronze medals. Meanwhile, Kuwait clinched their fourth successive basketball win, beating the United Arab Emirates, 81-75, while the volleyball side had the upper hand across all three sets, also against UAE. Saudi Arabia dominated Qatar, 53-44 Some five nations, excluding Oman, are taking part in this particular event which sees the top four teams qualify to the semifinals, where the top side play the fourthplaced and the second-placed play third ahead of a final between the two fixture’s winners. (KUNA) 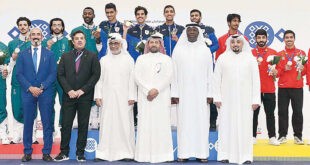 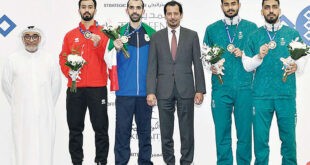 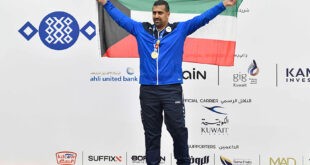 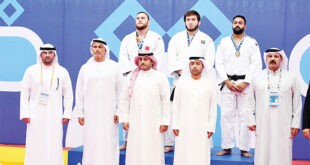 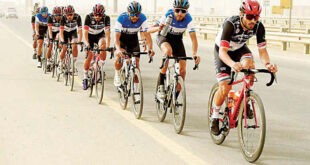