KUWAIT CITY, June 12, (Agencies): Kuwait hopes of advancing to the third round of Asian World Cup were ended after drawing 0-0 with Jordan at Jaber International Stadium. The first half lacked intensity as both sides created little chances. The turning point of the game came in 60th minute after Kuwait defender was sent off for two yellow cards. The visitors were denied the maximum points by outstanding goalkeeping from Khaled Al-Rashid. 10-man Kuwait nearly broke the deadlock in closing stage of the game but striker Youssef Nasser missed that golden opportunity. With this result Jordan stayed second with 14 points while Kuwait third with 11 points. Australia became the fourth Asian team to advance to the third stage of World Cup qualifying after beating Nepal 3-0.

Goals from Mathew Leckie, Fran Karacic and Martin Boyle in Kuwait City earned Australia Group B honors and a seventh win out of seven matches. The Australians joined Japan, South Korea and Syria in the next round, scheduled to start in September. Only the eight group winners progress along with the four best second-placed teams. China kept alive their hopes of adding to their sole World Cup appearance in 2002 by beating the Maldives 5-0 in Sharjah. Victory against Group A winners Syria on Tuesday will be enough to send China into the third round. The team’s form is good. In three games since the second round resumed on May 30, China have taken nine points, scored 14 goals and conceded none. But Syria will be a tougher test. Iran thrashed Cambodia 10-0 but will still have to win against Group C leaders Iraq – which defeated Hong Kong 1-0 to stay two points clear at the top – on Tuesday to finish first. There will be another showdown between first and second in Group G. Vietnam stayed two points clear of the United Arab Emirates with a 2-1 win over Malaysia. UAE’s 5-0 victory over Indonesia means victory over Vietnam on Tuesday will be enough for first place. In Group D, Saudi Arabia scored three goals in the last six minutes to defeat Singapore 3-0 in Riyadh, a result that left the host needing on Tuesday just a point against Uzbekistan, which beat Yemen 1-0, to finish first. 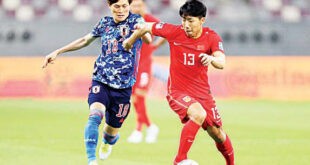 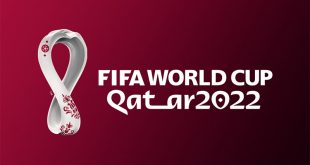 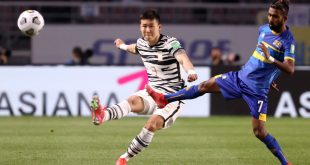