KUWAIT CITY, April 28, (Agencies): The Office of the United States Trade Representative announced it has decided not to include the State of Kuwait in its 2022 ‘Special 301 Report Watch List’ due to its continued and outstanding progress in addressing some of the concerns raised by some trading partners regarding intellectual property, law enforcement and transparency, reports Al-Jarida daily. Kuwait has been removed from the watch list this year, thanks to its increased efforts to enforce the law against the sale of counterfeit products and goods and the establishment of electronic platforms in the Ministry of Commerce and Industry and the Copyright Department so that both of them can organize and collect reports on intellectual property rights violations and trademark infringement.

Kuwait has also increased the level of transparency and its involvement in this regard through several meetings of the Intellectual Property Rights Working Group, which comes within the framework of the Trade and Investment Framework Agreement (TIFA) to develop trade and investment relations between the State of Kuwait and the United States. Chargé d’Affaires at the US Embassy James Holzneider said, “This is a great starting point towards expanding commercial opportunities for American companies in the State of Kuwait. The intellectual property rights motivate innovators such as engineers, artists and designers to develop and design new products and new technologies for the market.”

Reassures
He added, “Strong enforcement of intellectual property laws reassures investors and assures that their creativity is adequately protected. Lifting Kuwait from the Special 301 Report Watch List is a major step toward attracting foreign direct investment.” The “301 Special Report” is an annual report issued by the Office of the United States Trade Representative on the effectiveness and adequacy of the efforts of the United States’ trading partners to protect and enforce intellectual property rights.

The report lists the findings of the Office of the United States Trade Representative regarding international trading partners after a significant period of extensive research and increased engagement with partners. The acting director general of Kuwait National Library, Sheikha Rasha Al-Jaber Al- Sabah, on Thursday hailed a decision by the US copyright authority to remove Kuwait from the list of nations where intellectual rights’ supervision is warranted. Sheikh Rasha said in a statement that Wednesday’s (yesterday’s) decision by the Office of the United States Trade Representative (USTR) to remove Kuwait from “Watch List” for supervising protection of intellectual rights and its noninclusion in the 301 report for 2022 constituted “a substantial harvest for the joint efforts by the Kuwaiti State ministries concerned with the file of the intellectual rights.” She expressed gratitude to personnel at the Kuwaiti Copyright Office for exerting noticeable efforts since establishing the division in 2001.

The acting director general of the national library also thanked other state departments that contributed to making the positive record for Kuwait at the property rights’ level, extending her thanks also to “our partners at the American Embassy,” who had closely followed up on this file to pave the way of delisting Kuwait. 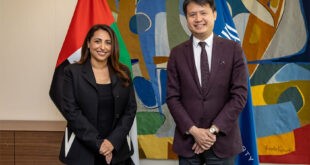