KUWAIT CITY, Nov 13, (KUNA): The State of Kuwait is one of the first countries that care for people with special needs out of the conviction that the welfare of this segment of society is a gauge of civilization. Based on humanitarian grounds and Islamic values, the state support to disabled persons does not only cover nationals but extends to include foreign residents as well.

Kuwait, a regional pioneer, updated its legal umbrella for the disabled persons with the efforts of the executive and legislative authorities converging to ensure decent life for those people.

Act No 8 for 2010 defines a person with special needs as the one who suffers from a total or partial disability that could hinder their physical or mental abilities or render them unable to satisfy the basic necessities or integrate effectively with their society on equal footing. Director-General of the Public Authority for Disabled Affairs (PADA) Dr. Tareq Al-Shatti said the Authority spares no effort in meeting the needs of the disabled people and facilitate the hardships they might face notably regarding the integration into the labor market. “The PADA has recently launched a department for employment affairs to help new graduates join the labor market according to their respective abilities,” he said in statements to KUNA.

Applications
“The department, an affiliate of PADA’s sector of educational and rehabilitation services, started receiving applications from job seekers from this segment of people in collaboration with the Civil Service Commission (CSC),” Dr Al-Shatti disclosed. “The PADA has also signed a protocol on cooperation with the Manpower and Government Restructuring Program (MGRP) and held a number of meetings with representatives of several state departments and the private sector to remind them of their obligations under Act 8 for 2010

. “The law stipulates that people with special needs should represent at least four percent of the workforce of the public and private institutions,” he went on. Dr Al-Shatti noted that the PADA has also set the protected workshop program aiming to rehabilitate and employ persons with minor or medium mental disabilities at jobs that suit them.

Thanks to their perseverance, many disabled persons were able to assert themselves professionally and attained leading positions at public and private corporations, he said, noting that some of them notched up medals at international Paralympic games. “The CSC is working with us to make the private sector a friendly environment for persons with disabilities. This cooperation prepared the ground for ‘Ehlam’ (dream) initiative geared to integrate persons with special needs into the labor market in a proper way,” he stated.

“The ambitious initiative, developed in keeping with the objectives of relevant international organizations, won the praise and support from the public and the government; it stemmed from the vision of Ibrahim Al-Kandari, a man who was able to defeat all hardships and assert himself in the labor market. “The objectives of the initiative include, inter alia, building a social partnership for integrating disabled persons into the labor market, thus bringing into play their role in attaining the goals of the national plan for sustainable development,” Al-Shatti added.

For his part, Al-Kandari, head of Ehlam team, said he used to dream of providing jobs for graduates with special needs, from Kuwait University and other universities, during his university study. “The Ehlam initiative is meant to build the capacity of these people and make them better able to join the labor market,” Al-Kandari who was able to overcome a movement disability and provide a good example for other people, said in statements to KUNA. “The first batch of trainees has been graduated from this program that aims to double the numbers of workers from this segment at private and public institutions,” he said. “Unofficial statistics show that less than 1,000 persons with disabilities work at both the public and private sectors, while the PADA puts the figure at 47,000,” Al-Kandari affirmed.

“Social and psychological surveys show that the majority of people with special needs were raised from their young age to lead an idle life and not work; this left them with a deep sense of marginalization and depression,” he regretted. On the financial benefits, provided by the state for disabled employees who don’t work equally with workers, Al-Kandari said the benefits are helpful only if the disability prevents the person from work. 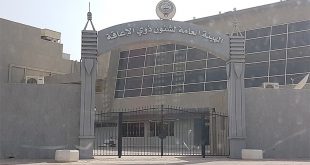 Professors at universities use toilets meant for disabled students

KUWAIT CITY, March 1: Kuwait, lost recently one of the most prominent citizens ‘the mother …