Kuwait institutions work tirelessly to help afflicted around the world

KUWAIT CITY, July 18: Last week was full of humanitarian activity for the various Kuwaiti institutions, which work continuously and without interruption to stand by everyone in need around the world. In this context, the Kuwaiti hand of goodness moved between countries and regions to deliver aid and relief, as well as to enhance cooperation with various local, regional and international bodies to facilitate the performance of this task. In Kuwait, the United Nations High Commissioner for Refugees and the Kuwaiti Sheikh Abdullah Al-Nouri Charitable Society signed on July 11 a grant agreement to finance the UNHCR cash assistance program which aims to empower more than 2,600 Syrian refugee families in Jordan. In Yemen, local officials in Hadhramaut governorate, east of the country, laid the foundation stone for the project to establish and equip the Najwa Ahmed Al- Qatami Center for the Care and Rehabilitation of Orphans in Sayun, under the supervision of the Kuwait Red Crescent Society.

Thanks
In a statement to Kuwait News Agency during the ceremony held on July 12, Assistant Undersecretary of Hadhramaut Governorate Hisham Al-Saeedi expressed his deep thanks to Kuwait, HH the Amir, the government and the people for their support for Yemen in general and Hadhramaut. In Yemen as well, the International Charitable Society for Development and Development in the State of Kuwait concluded on July 15, the activities of the free medical camp for eye treatment, cataract surgery and lens implantation in the Yemeni city of Taiz, coinciding with the launch of the project to sponsor 20 orphaned children. Also on July 15, the Kuwait Red Crescent Society announced the departure of a Kuwaiti relief plane from Abdullah Al-Mubarak Air Base to Tunisia, loaded with medical equipment and devices to help the brotherly country, which suffers from deteriorating health conditions, in facing the COVID- 19 pandemic and supporting its health system Director of the Medical Services Department in the society, Manhal Al-Anzi, told KUNA that the State of Kuwait, through the Kuwaiti Red Crescent Society, has spared no effort to stand by Tunisia to confront the pandemic and provide special health equipment and oxygen devices to Tunisian hospitals. (KUNA) 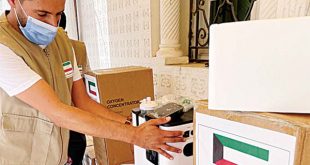