KUWAIT CITY, July 2: Kuwait stocks chalked a modest rebound on Thursday to wind up the week on a cheery note.

Over 83 million shares changed hands – down 21 percent from the day before. The sectors closed mixed. Industrial sector outshone the rest with 0.85 percent gain whereas Real Estate shed 0.6 pct, the worst performer of the day. Banking sector were ahead in both volume and value with 33.4 million shares traded for KD 9.7 million.

Among the standout performers, sector bellwether National Bank of Kuwait rallied 77 fils to 823 fils on back of 2.8 million shares stemming the three-day fall while Kuwait Finance House added 3 fils after pushing 3.7 million shares and has retreated 202 fils year-to-date. Mabanee Co slipped 6 fils to 659 fils. Zain climbed 5 fils to 558 fils on back of 2.89 million shares while Ooredoo gave up 3 fils extending last session’s losses and closed at 651 fils. STC rose 3 fils to 651 fils while logistics major Agility sprinted 7 fils to 735 fils with a volume of 1.3 million. Humansoft Holding jumped 30 fils to KD 2.780 and KIPCO fell 4 fils.

The market opened firm and headed north in early trade. The main index continued to climb in choppy trading amid buying spurt in some of the blue chips and moved sideways past the mid-session before ending with modest gains. Top gainer of the day, Thuraya rallied 13 pct to 139 fils and NICBM sprinted 6 pct to stand next. National Ranges Co skidded 5 pct, the steepest decliner of the day and Ahli Uniited Bank continued to top the volume with 16.5 million shares. Despite the day’s gains, the market spread as nearly even. 46 stocks advanced whereas 43 closed lower. Of the 108 counters active on Thursday, 19 closed fl at. 5,475 deals worth KD 17.1 million were transacted during the session.

In the Banking sector, Gulf Bank took in 1 fil on back of 3.2 million shares while Kuwait International Bank was up 2 fils at 175 fils. Burgan Bank stood pat at 194 fils and Boubyan Bank inched 1 fil higher. The market was mixed during the week.

The main index closed lower in three of the five sessions shedding 43 points week-on-week. It had rallied 135 points during whole of June and is down 1,157 points yearto- date. 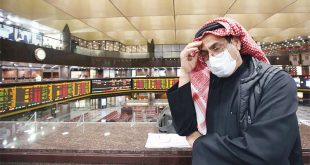 KUWAIT CITY, June 3: The equation of sale and purchase at the Kuwait Stock Exchange …