KUWAIT CITY, Nov 12, (Agencies): Kuwait has strongly condemned the terrorist bombing of an oil pipeline in the Kingdom of Bahrain, extending complete solidarity with Manama against this heinous act. Kuwait rejects “this terrorist acts which aims at undermining security and stability of the Kingdom of Bahrain, as well as terrorizing civilians,” a foreign ministry source said in a statement.

He called on the international community to double efforts to addressing terrorism and ridding the world from this menace. Secretary General of the Gulf Cooperation Council (GCC) Abdullatif Al-Zayani also condemned strongly the blast, which targeted an oil pipeline in Bahrain. In a press statement, Al-Zayani described the blast as a “serious terror crime” which endangers the Kingdom’s supreme interests and terrifies both citizens and residents.

He expressed his strong denouncement of targeting oil pipelines by terrorists, considering this as “a dangerous development in criminal methods adopted by the terrorist organizations which are supported and directed by Iran.” Such crimes will not undermine the resolve of the wise leadership of the Kingdom of Bahrain and its insistence on maintaining security and stability, and eliminating all terrorist organizations from the society. He lauded efforts by Bahrain’s security apparatuses to control the fire efficiently and at record time, and their measures taken to protect residents in the area.

Meanwhile, Bahrain accused Iran of being behind the pipeline fire that temporarily halted oil supplies from Saudi Arabia, but Tehran rejected the allegation as “childish”.

On Saturday, Bahrain’s foreign minister blamed Iran for the fire near the capital Manama, which was brought under control after it was discovered earlier in the day. “The attempt to blow up the Saudi- Bahraini pipeline is a dangerous escalation on Iran’s part that aims to terrorise citizens and to harm the world oil industry,” Sheikh Khalid bin Ahmed al-Khalifa wrote on Twitter. A spokesman for the Iranian foreign ministry on Sunday rejected the accusations. “Obviously, the only thing Bahraini officials have learned to do after each incident in the emirate is to accuse Iran,” Bahram Ghassemi said. “The era of childish accusations and lies is over,” he said, adding Iran wanted “the stability and security of its neighbours”.

Bahrain relies on the Abu Safa field, which it shares with neighbouring Saudi Arabia, for much of its oil, pumped in via a 230,000-barrel-perday pipeline. National oil company Bapco on Sunday said it had fixed the pipeline, which would allow oil to flow back into the country. Emergency services brought the blaze under control after it was discovered early Saturday, Bahrain’s interior ministry said, and evacuated homes in the nearby village of Buri, 15 kms (10 miles) south of Manama.

The ministry blamed a “terrorist act” for the fire. “It is an act of sabotage, a serious terrorist act aimed at harming the interests of the nation and endangering the population,” it said on Twitter. Bahrain, a Shiite-majority kingdom ruled by a Sunni dynasty, has seen sporadic violence since the repression in 2011 of a protest movement demanding a constitutional monarchy and an elected prime minister. Authorities have since tightened their grip on dissent, jailing hundreds of protesters and stripping a string of high-profile activists and clerics of citizenship. The government denies it discriminates against Shiites and accuses neighbouring Iran, the predominant Shiite power, of stirring up tensions, which Tehran refutes. Bahrain is home to the US Navy’s Fifth Fleet and a British army base is currently under construction. 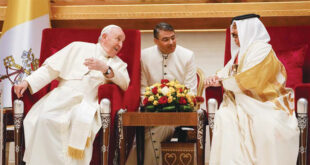 This post has been read 6365 times! MANAMA, May 26: Kuwaitis planning to travel to …